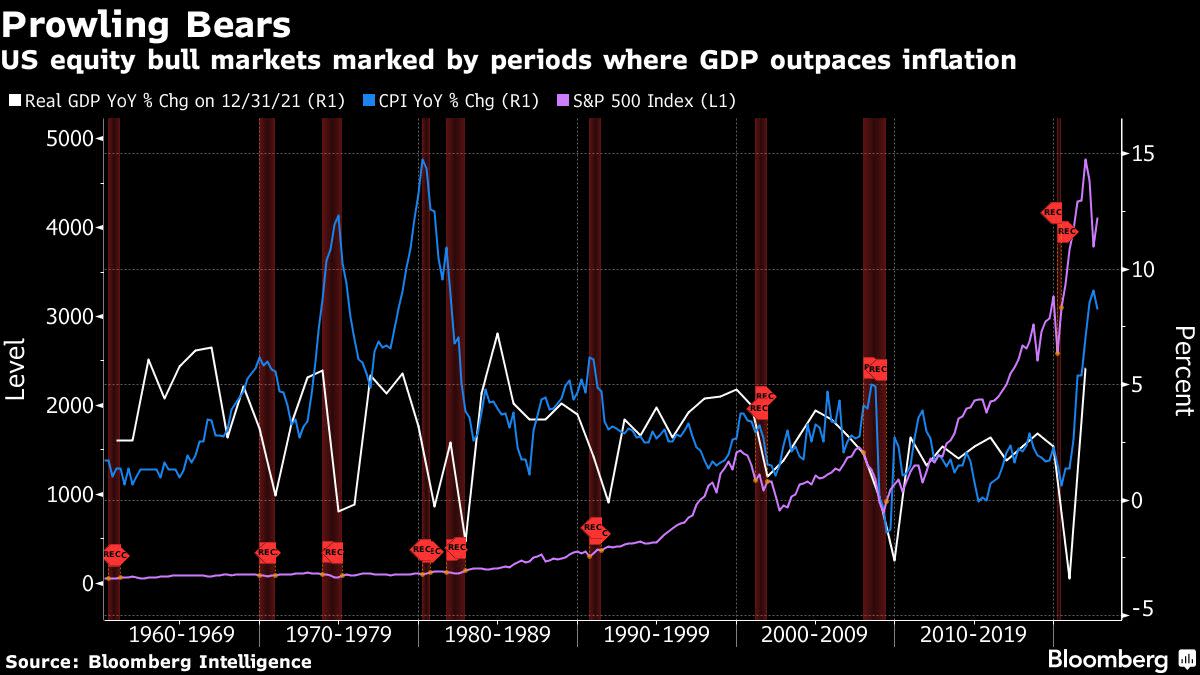 (Bloomberg) — The chances of a longer-term bear market in stocks rose Tuesday as the August consumer price index came in higher than expected and showed inflation continuing to outpace US economic growth.

Investors were rattled by the data, putting the S&P 500 Index down 3.2% and on pace for its biggest drop since late August. The reason is clear, as the inflation data will likely keep the Federal Reserve on pace for a third-straight 75 basis-point interest-rate hike and potentially open the door for more aggressive tightening down the road.

Read: Stocks Are On a Roll; Inflation Data Determine If It Continues

Historically, US equity bull markets are marked by periods where the real economy grows faster than inflation, the opposite of what’s happening right now. Consensus estimates suggest US consumer prices are likely to run hotter than the gross domestic product through at least the first half of 2023, according to Bloomberg Intelligence. This is sparking fears that the summer’s stock market gains could be just a counter-trend rally.

“Major bear markets of the past half-century were accompanied by inflation outpacing growth, such as the rapid jump in prices in the 1970s and a period of scant expansion and steady disinflation in the early 2000s,” BI equity strategists Gina Martin Adams and Michael Casper wrote in a research note.

Although inflation gathered momentum in the latter half of the 1960s, it didn’t exceed growth until the end of the decade, in-line with a peak in stocks in 1968, according to Martin Adams and Casper.

That said, early signs of peak inflation are starting to emerge. For example, US gasoline prices have fallen for 13 weeks in a row, while Corporate America sees a relatively stable economic and inflation outlook despite investors’ recession fears.

Now, fundamentals may offer some relief for investors. Corporate earnings growth typically suffers during US economic recessions, but the degree of the declines varies significantly and depend somewhat on the extent of GDP weakness, BI data show. Major downturns in the economy in 1975, 1980 and 1981 coincided with relatively small hits to earnings, while the large downdraft in growth in 2009 was mimicked by the worst decline in earnings since World War II.

So despite the latest CPI reading, further signs of easing inflation could help stabilize corporate margin forecasts and keep a lid on prices, which will be a “long-term key to a resumed bull trend,” Martin Adams and Casper added.

“A faster increase in interest rates could result in slowing inflation, which supports the earnings growth outlook more than is popularly believed, for margins have been the source of EPS weakness and that squeeze on profitability is a direct result of higher prices,” according to Gillian Wolff, BI’s senior associate analyst.