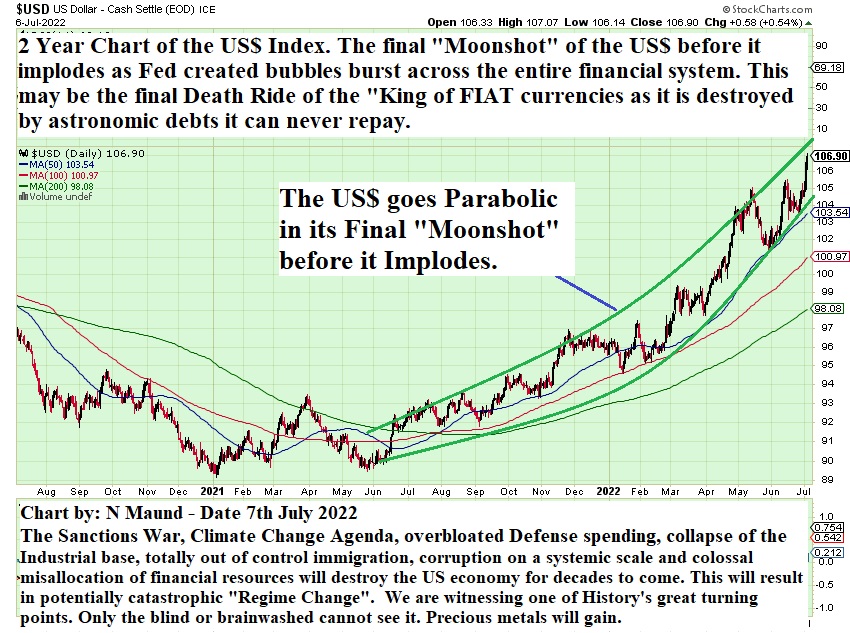 This article was inspired by my brother Nigel Maund sending me the chart of the dollar index shown below on which he had delineated an accelerating parabolic uptrend in this index.

I decided to check it out for myself and quickly discovered that not only is Nigel’s interpretation correct, but more than that, the index is following a perfectly defined parabolic trajectory. This is a crucially important fact that has very useful practical implications for all of us. First of all it means that holders of any dollar denominated assets can sleep soundly at night as long as the index remains above the parábola (provided that they outpace inflation). Secondly, it means that gold and silver and some other commodities could remain under pressure, at least in terms of their dollar price, as long as the dollar continues to accelerate higher above the parabola boundary, especially in an unfolding market crash situation. The converse of this is that any dollar denominated assets should be dumped immediately if the index breaks down clear below the parabola. This can be expected to happen as soon as it becomes clear that the dollar is finished as the world reserve currency, which is being made more likely by the US having a corrupt geriatric buffoon as President and countries gravitating towards the China – Russia axis in trade and if the US and NATO get their backsides thoroughly kicked in Eastern Europe, which looks probable even and especially if we see mushroom clouds rising. Again, immediately when the index breaks below the parabola, investors should move heavily into gold and silver which will then skyrocket.


There are two additional important points to be made here. The first is that the dollar index chart shows the dollar’s value relative to other currencies, it does not show the dollar’s intrinsic value in the sense of its purchasing power, which is rapidly declining due to profligate money creation. Thus, it could continue to accelerate higher without limit as the other currencies which it is being measured against decline in value at an even more rapid rate. Hyperinflation in other currencies could see the dollar index moonshot, even as the dollar itself rapidly loses value, so it might not break down from the parabola for a long time yet. The second point is that the euro constitutes a massive 56% of the dollar index, so if the euro goes down the drain, which is likely with an expanding war in Europe, it should drive the index higher at an even more rapid rate. It is the height of stupidity Europe making an enemy of Russia, which only wanted to be friends, and it shows that Europe’s ruling class, who seem to like to engage in destructive wars on the continent every two generations or so, have learned nothing from history, and if they persist in provoking Russia as they are at present they could wind up with many of their large cities as heaps of smouldering ruins as history repeats itself. The reason that Europe’s leaders are acting against the interests of their citizens is that they have been installed by or are controlled by the World Economic Forum cabal and are pursuing their radical Agenda 2030 objectives which include the appropriation of all private property and a drastic reduction in population. Notable examples are Macron of France and the Prime Minister of Holland who recently told Dutch farmers that they are to cease farming, which has provoked an understandable large scale reaction. 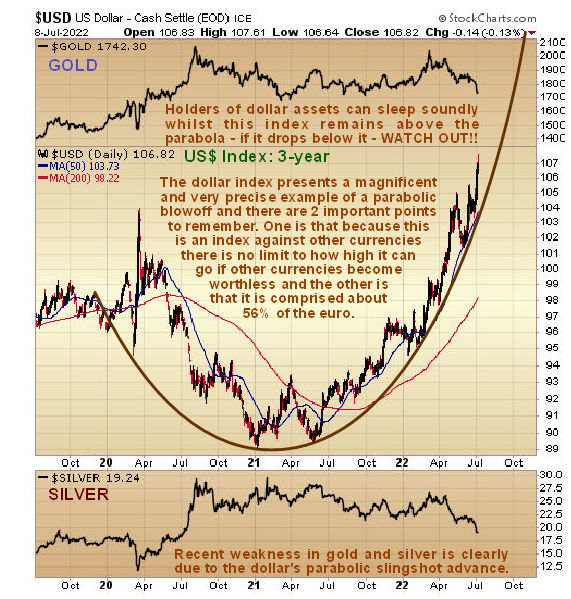 Lastly, it is worth having a quick look at the chart of the dollar index for the period when there there was a major credit crisis that triggered a market meltdown, which was in 2008. The chart below covers the 3-year period that includes all of 2007, 2008 and 2009. On this chart we see that the main part of the dollar’s sharp advance fell entirely within the 2nd part of 2008, and also that, unlike the current situation where the dollar index has accelerated into a steep parabolic advance, there was no buildup – it just suddenly spiked vertically and before the end of the year it was mostly over. The big difference between now and then is that back then the Fed had ammunition to defuse the crisis, it had room to lower rates and had not embarked on major QE. Now the Fed has almost no room to lower rates and with its balance sheet already massively bloated from earlier QE programs, it has no room to engage in more QE. That won’t stop it from trying though and the result will be a hyperinflationary bust. 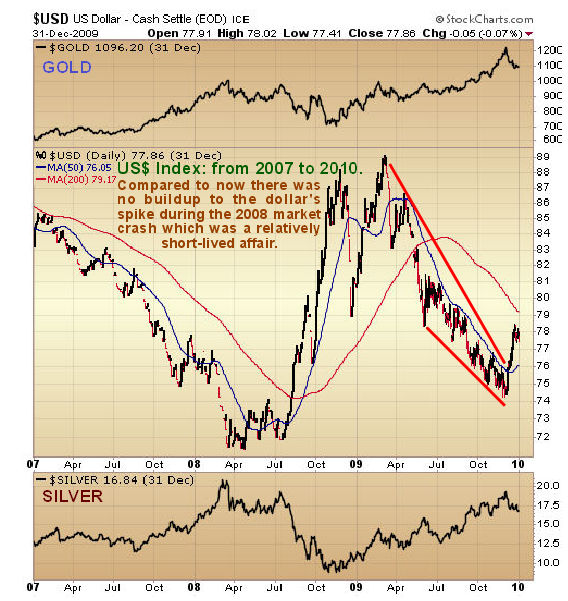