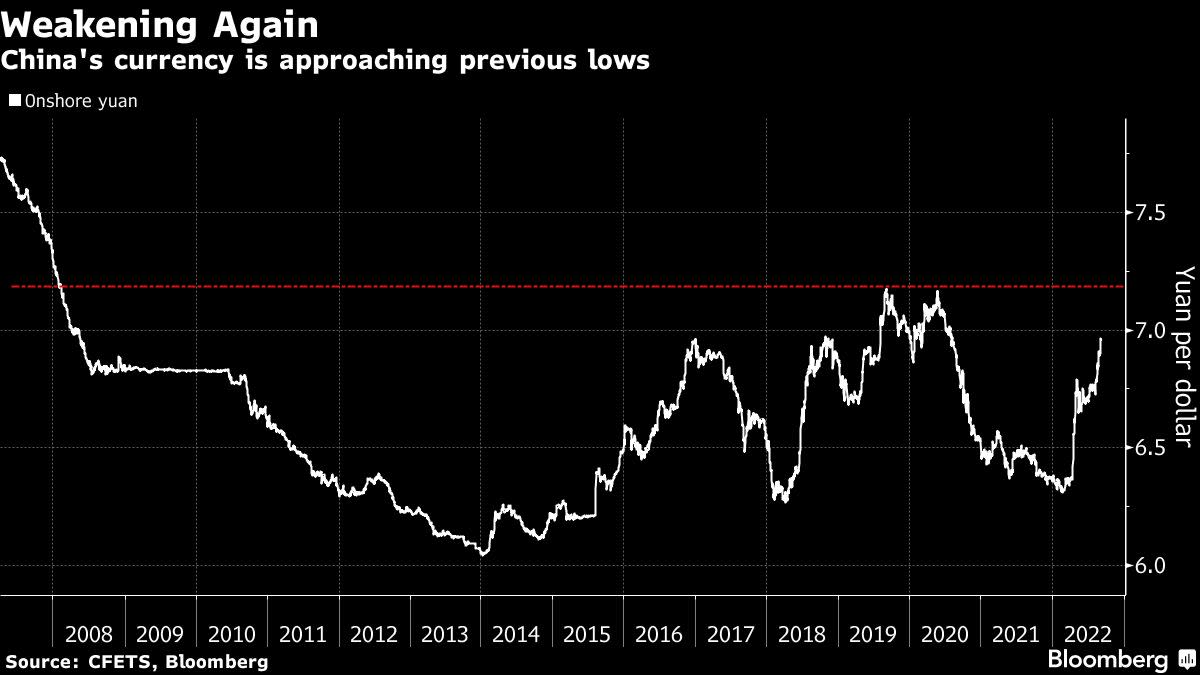 (Bloomberg) — With virtually every currency weakening against the dollar, Chinese policy makers have to decide whether it’s worth their while resisting the decline of the tightly managed yuan.

China’s currency is rapidly approaching levels that prompted authorities to end episodes of depreciation in 2020 and 2019, when the yuan neared 7.2 per dollar, or about 4% weaker than its current level. Strategists say it’s only a matter of time before the yuan dips past 7, a key line of defense for China’s central bank in recent years with the exception of brief disruptions since Donald Trump’s trade war against Beijing.

Where Beijing’s limit for depreciation is remains unclear. But the scale and intensity of measures taken so far suggest the focus is on the pace rather than the direction of the yuan’s moves. A surging dollar and uncertainty over the strength of Chinese exports are among reasons for authorities to tolerate a weaker currency, as long as it doesn’t cause financial or social instability in the run-up to a major Communist Party gathering next month.

“If yuan went to 10 and euro and yen were stable against the dollar, that would be a much more problematical issue,” said Jim O’Neill, senior adviser to Chatham House. “But if the dollar is rising against all currencies because of Fed tightening, there is not a huge amount China can do.”

While the yuan is down over 8% against the greenback this year and on track for a seventh straight month of declines, it’s still outperformed some of its major regional peers. The won is down about 6% this year versus the Chinese currency, while the yen has weakened more than 12% against it.

To be sure, there are plenty of reasons for the yuan to weaken, namely diverging monetary policies with much of the world, interest rates differentials, capital outflows and China’s slowing economy. But additional losses may fuel speculation that authorities are unshackling the currency — thereby spurring traders to bet on further depreciation. Such one-way bets have long been resisted by the PBOC.

“This is the challenge that comes with having a managed currency – there’s much more of a signal in what policy makers are doing or not doing,” said Viraj Patel, a strategist at Vanda Research in London. “Too much weakness is often a red flag for foreign investors, as it suggests that Chinese officials may know something that we don’t.”

China’s central bank has taken a slew of measures to ease the dollar-induced pressure, including setting a stronger-than-expected reference rate for 13 straight days. It has also slashed the amount of foreign currency banks must hold in reserve. State banks have been spotted selling dollars while some local banks were said to have used a mechanism that helps boost the yuan’s value when submitting prices for the PBOC’s fixing calculations.

None of these measures has come across as forceful enough or stopped traders from expressing more entrenched bearishness about the yuan. Rhetoric from policy makers also has sounded less alarming: PBOC Deputy Governor Liu Guoqiang said Monday the yuan’s depreciation against the dollar this year has been much less than that of other major currencies. Two-way fluctuation will be the norm in the short term, he added, while warning against betting on specific levels.

Some analysts say the yuan could weaken further. Bank of America Corp. predicts the currency to end the year at 7 per dollar, while Nomura Holdings Inc. sees it fall to 7.2.

“The spot level is driven by both domestic and external factors,” said Lemon Zhang, a foreign-exchange strategist at Barclays Plc in Singapore. “Defending a particular level with headwinds from both could be costly and ineffective.”

There’s indeed little evidence of panic in the currency market at the moment. This will hold as long as the yuan’s moves are in line with economic fundamentals, according to Anders Faergemann, a senior portfolio manager at PineBridge Investments in London. But he warned that any delay in exiting China’s strict Covid Zero policy or a further deterioration in the country’s housing crisis could easily tip the calm into chaos.

Policy makers do have enough ammunition in store to manage the currency, including further relaxing banks’ foreign exchange reserve requirements or boosting bill issuance to tighten yuan liquidity in the more freely traded offshore market. Also at their disposal are more aggressive measures such as adding a risk premium on foreign-exchange forward transactions, which would discourage speculators by increasing the cost of dollar funding, say analysts at Bank of New York Mellon Corp. and Mizuho Bank Ltd.

“Needless to say, if the yuan weakened beyond 8.5, policy makers would have some serious questions to answer,” said Faergemann.