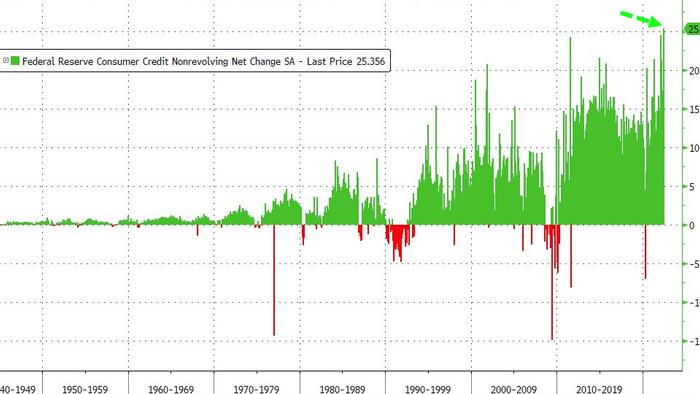 Last month we began to see the first signs of the consumer cracking as credit numbers slowed drastically after months of spend-heavy consumption amid tumbling real wages.

One month late and June data, released today by The Fed, show that consumer credit rebounded dramatically with an additional $40.154 billion piled on (well above the expectation of a $27 billion rise). That is the second largest monthly spike in consumer credit in history.

Non-revolving debt – funds less discretionary items such as cars and college education – surged by a record $25.35 billion in June…

Bottom line: The renewed reliance on revolving debt to maintain lifestyles in June (when gas prices were soaring to record highs) suggests the consumer is anything but ‘happy’ (as sentiment surveys make very obvious). What’s worse is that (despite today’s anomalous surge in payrolls), surging initial jobless claims from a new wave of corporate layoffs combined with soaring inflation – all at a time when most marginal credit cards are maxed out – will make the pain across US consumers unbearable, as it will come just as most households are tapped out and no longer have dry powder on their credit card for discretionary purchases.

Savings are tapped out and credit cards are maxed out!

In short, the recession which unofficially started in Q1 and worsened in Q2, is about to get much worse in Q3 (as the Composite PMI suggested this week) when the key support pillar of the US economy, consumer spending which accounts for 70% of GDP, goes into reverse now that maxed out credit cards have to finally be repaid.