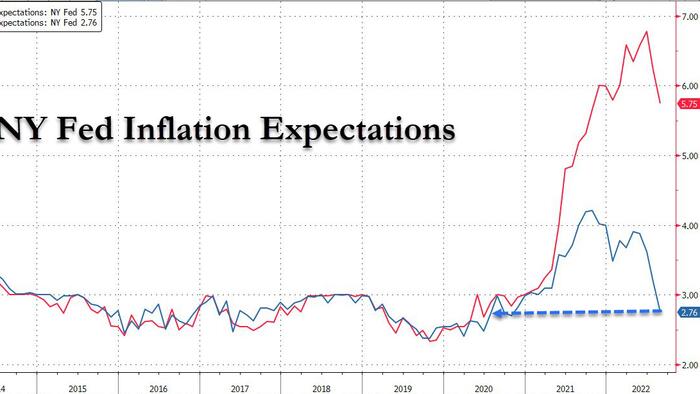 With inflation expectations suddenly tumbling across the board, the best example of which is the collapse in 2Y Breakevens which are hitting fresh 2Y lows every day amid the ongoing collapse in commodity prices, which has prompted some (i.e., us) to rhetorically wonder last week when the Fed will start cutting rates…

so when do we cut rates pic.twitter.com/YBA5y0T8Az

… moments ago the latest NY Fed consumer expectations survey confirmed what we already know, namely that both one- and three-year-ahead inflation expectations posted steep declines in August, from 6.2% and 3.2% in July to 5.7% and 2.8% respectively.

Remarkably, the more relevant, 3Y-inflation expectation, is back to August 2020 levels when the Fed was viewed as keeping rates at zero for years and years, and when growth assets were exploding higher having priced in QE pretty much in perpetuity. All of which means that consumers are now bracing for the coming recession.

That said, the survey’s measure of disagreement across respondents (the difference between the 75th and 25th percentile of inflation expectations) increased to a new series high at the one-year horizon but decreased at the three-year horizon. It appears nobody really has any idea what is coming but everyone wants to be fervently optimistic.

More remarkably, the median five-year-ahead inflation expectations, which have been discussed in the monthly SCE core survey on an ad-hoc basis since the beginning of this year and were first published in July, also declined to 2.0% from 2.3% – and are now at the lowest level on (relatively short) record.

Expectations about year-ahead price increases for gas also continued to decline, with households now expecting gas prices to be roughly unchanged a year from now, which is remarkable as this was 10% back in May. Over the next year consumers also expect food prices to rise 5.83% (a 0.8% drop from July); rent to decline by 0.3% to 9.6%, medical costs to rise 9.31% (a 0.1% increase over the past month); the price of a college education to rise 8.41%; rent prices to rise 9.62%.

Also of note, the median home price expectations declined sharply by 1.4% to 2.1%, the lowest reading since July 2020, and falling below pre-pandemic levels. The decline was broad based across demographic groups and geographic regions. Home price expectations have now fallen by nearly two-thirds since the April 2022 reading of 6.0%.

Some other observations, first on the state of the labor market:

And then on broader Household Finances: