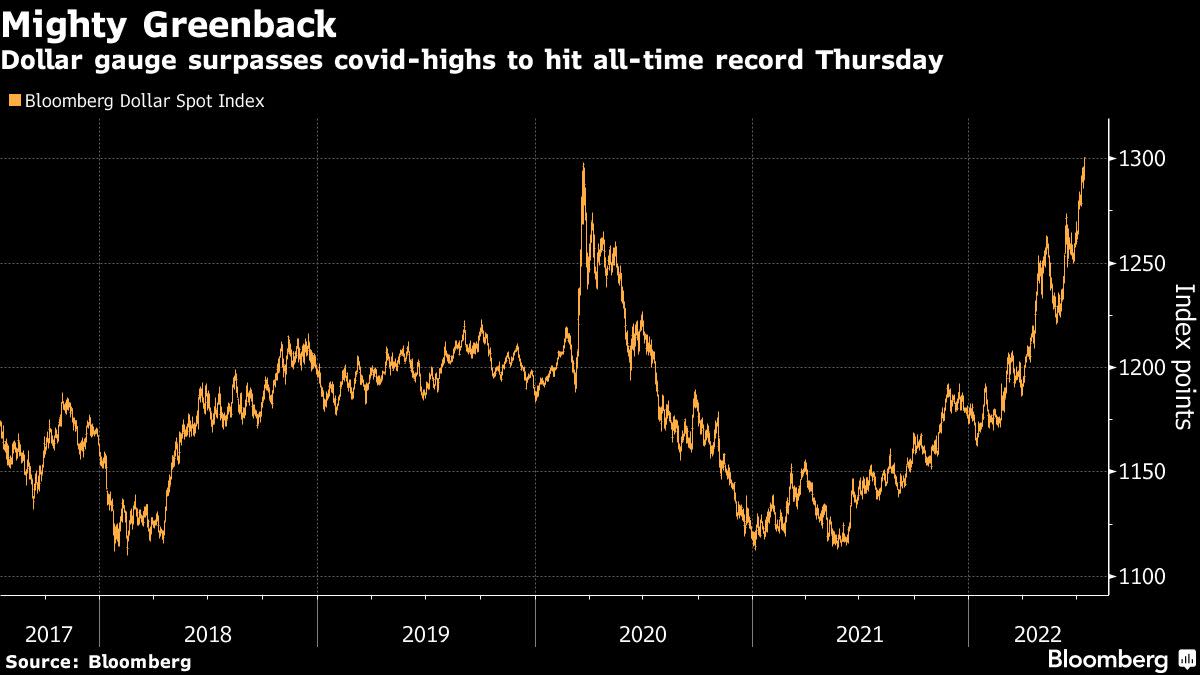 (Bloomberg) — US stock-market investors are already contending with the nerve-shattering combination of surging inflation, growing recession fears and a Federal Reserve that’s raising interest rates at the fastest pace in decades.

Now the US dollar is piling on, too.

A broad index of the greenback surged to a record high on Thursday amid speculation that the Fed will step up the scale of its monetary policy tightening, leaving investors flooding into the US to seize on higher interest rates. That will make US exports more costly and cut into American companies’ overseas earnings, posing another obstacle to once-heady stock valuations that have been steadily pulled down this year by the risks building up in the global economy.

Stock investors will be closely watching for signs of the impact as more companies start reporting their second-quarter earnings and provide updated outlooks for those ahead. Currency volatility cost North American companies $4.56 billion in the fourth quarter of last year, and the dollar has only gained steam since then, advancing 12% against the euro and more than 17% against the Japanese yen.

“The way that companies project forward, especially those that have substantial amount of international earnings, will be impacted by what they expect the dollar to be doing,” said Lauren Goodwin, economist and portfolio strategist at New York Life Investments, in an interview at Bloomberg’s New York office.

The dollar’s strength reflects the growing gulf between monetary policy in the US, Europe and Japan. That’s been cast in sharper relief since Wednesday, when a report showing that consumer prices jumped by another four-decade high stoked speculation that the Fed may boost its overnight rate a full percentage point to as much as 2.75% at its meeting this month, accelerating a campaign it started in March. By contrast, the European Central Bank has yet to start raising rates and the Bank of Japan is keeping them pinned down to stimulate its economy.

“Similar to 1Q22, we expect FX headwinds to have taken an even bigger bite out of 2Q22 margins and remain a common theme across sectors,” Wells Fargo Securities analysts led by Christopher Harvey wrote in a note this week.

Microsoft Corp. last month said the dollar was eating away at its profits in a rare mid-season earnings forecast revision. Other firms including Biogen Inc., Costco Wholesale Corp., HP Inc. and Salesforce Inc. said they were affected by the strong dollar, too.

It’s possible the dollar’s gains could slow or even reverse. Matt Maley, chief market strategist at Miller Tabak + Co., said the dollar now looks “overbought and over-loved,” and could dip soon, leaving room for the euro to tick up.

But that would shift the currency-market pressure to a new group of stocks. Banks, which typically perform better when interest rates are rising and the dollar is getting more expensive, would likely be negatively affected. As would commodity-linked companies, those exposed to gold and copper, Maley said.