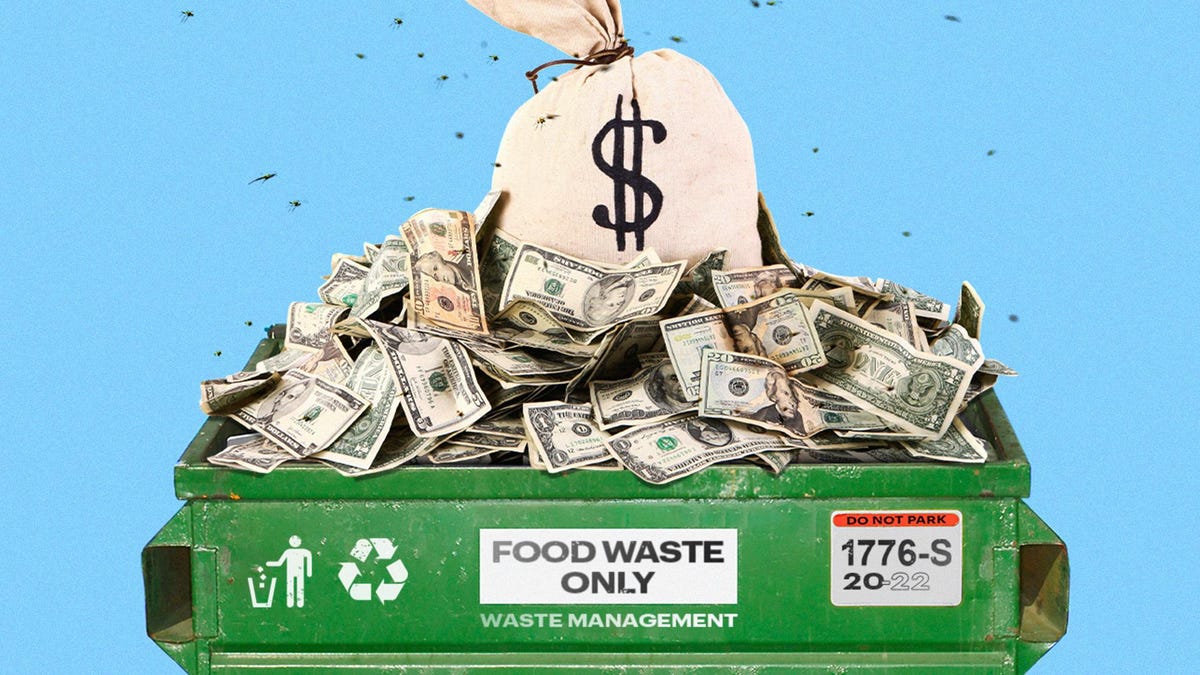 Every year, $400 billion ends up in dumpsters, and because it cuts into corporate profits, companies can treat it as tax deductible.

“We believe that by working with others we can actually have it so that nobody goes to bed hungry,” Kroger CEO Rodney McMullen said.

The company is inching toward the goal.

As much as 40% of all food in America ends up wasted. That’s more than 100 billion pounds, worth more than $400 billion, each year. Not only is it shameful to toss food when 38 million Americans, including 12 million children, go hungry, it’s also an existential risk to grocery stores. At Kroger, food waste represents an estimated 4% of the 2,800-store chain’s nearly $140 billion in annual sales, or about $5.6 billion. And that’s for a business that’s actively working to reduce it. Some grocers have an annual level of food waste, or “shrink,” of 5% to 7%. The ones that hit double digits typically only survive long enough to get rolled up or go bankrupt.

There’s a powerful disincentive, however, to improving and eradicating the problem. Since throwing out food cuts into corporate profits, the Internal Revenue Service classifies it as tax deductible. It’s unclear what percentage of deductions are related to food waste, or how much supermarket companies claim, because the figure isn’t broken out separately. But that’s how taxpayers end up footing the bill for food that winds up in the dumpster.

“The government contributes to the cost,” says James McCann, the former CEO of grocery chains Tesco, Carrefour and Ahold USA, who founded investing firm Food Retail Ventures. “Essentially, the cost of shrink is tax deductible because it reduces profits at whatever the company’s marginal rate of taxation is.”

Some countries around the world have tried to encourage retailers to reduce food waste by making parts of shrink not tax deductible, which, as McCann says, “If you’re a retailer, that has a huge effect.”

Until recently, most grocers and food providers didn’t know how much they were throwing out. Whatever inefficiencies plague the system end up being paid for by shoppers, McCann says: “It’s billed into the price the consumer pays.”

Tax forms have no line items for food waste. From an accounting perspective, it’s counted as an impact on a corporation’s profit-and-loss statement. Food qualifies as an inventory asset because ingredients are raw materials. The way it gets written off, there’s a food cost for any given accounting period. That food cost is based on what’s left in inventory and how much food has been used. That’s the amount deducted from inventory as having been consumed.

“It is obscured, if you follow the dollars,” says Andrew Shakman, CEO and cofounder of LeanPath, which focuses on food waste in the restaurant and food service industries. “Nowhere in there is food waste a discrete item. It falls out as an inventory adjustment. Whether that food was used and went to a customer or was used and went to the garbage is not something you would see.”

Shankman says he has pioneered food waste measurement. His platform uses data to cut food waste at the preconsumer level by half or more, which “puts significant dollars back on the bottom line.” It’s put to work in kitchens across 40 countries.

In 2021, more than $2 billion dollars was invested in food waste “solutions,” as tracked by the advocacy group Refed. That was the most money ever dedicated to the problem in all the years that Refed has been tracking the data.

There’s also an environmental cost to food waste. Sending it to landfills creates methane, a potent greenhouse gas, which produces more emissions that are heating the planet. The EPA estimates that each year, U.S. food loss and waste is responsible for 170 million metric tons of carbon dioxide equivalent greenhouse gas emissions, which is equivalent to the annual carbon dioxide emissions of 42 coal-fired power plants. Globally, food waste accounts for 8% of all greenhouse gas emissions.

If a grocery store or food provider donates wasted food and tracks it, the business may also apply for a tax subsidy that doubles the amount of the tax deduction.

Still, a lot of companies don’t take the enhanced reduction, says Dana Gunders, the executive director of Refed. It’s too complicated, and there are other credits that are easier to get better results from.

“The bottom line is that it doesn’t make sense from their tax strategy to use that enhanced tax reduction,” says Gunders. And while it’s unclear how many businesses take advantage of the subsidy, or how much total taxes are claimed to be reduced through it, Gunders says, “It’s undersubscribed for what you would think.”

The tax credit, according to Gunders, “is not what’s driving donations.”

MORE FROM FORBESEXCLUSIVE: Bill Gates Reveals How He And Ex-Wife Melinda Came Together For Blockbuster $20 Billion Gift That Makes Them World’s Biggest GiversBy Randall Lane
MORE FROM FORBESElon Musk Isn’t The Only Billionaire With 9-Plus Kids. Meet The U.S.’ Richest People With The Most ChildrenBy Jenae Barnes
MORE FROM FORBESElon Musk’s Relationship With Employee May Have Violated Tesla’s Ethics Code, Experts SayBy Rashi Shrivastava
MORE FROM FORBESThe Inside Story Of How The Daughter Of José Eduardo Dos Santos Looted Angola’s RichesBy Kerry A. Dolan