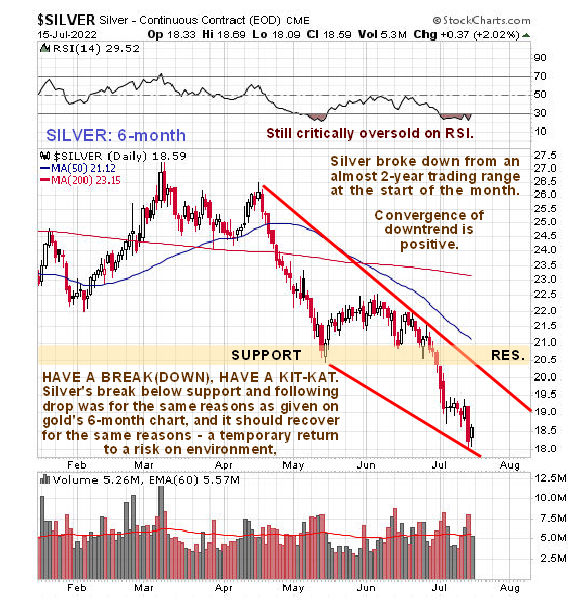 Much of what has been written in the parallel Gold Market update, especially that pertaining to the debt market and the dollar, applies equally to silver so we will not waste time repeating it here, but rather proceed directly to the silver charts.


On the 6-month chart we can see that, while silver is obviously still in a downtrend, there are reasons for suspecting that it will soon turn higher. The break lower at the start of the month involved a breakdown from a large trading range that we will look at shortly on the 3-year chart, where we will see that this breakdown could have been a so called “head fake” that probably shook out a lot of longs. In any event we can see that silver has been critically oversold on its RSI indicator all this month and is now quite heavily oversold relative to its 200-day moving average, giving it plenty of scope to recover. Note that the lower trendline is tentative and may have to be adjusted if it falls further which is not expected given that the ECB’s announcement on Friday should switch the markets back into risk on mode for a while.


Turning to the 3-year chart we can see immediately the breakdown at the start of the month that will have caused many longs to give up. This breakdown is thought to be a “head fake” for various reasons, chief of which are the fact that this break to lower levels has not been confirmed by momentum (MACD did not drop to a new low) and the now bullish COT chart which we will come to shortly. Other factors supporting a reversal to the upside are the convergence of the channel shown on the 6-month chart, the outperformance of the Accum – Distrib line relative to price shown on this chart and the price having dug into a zone of quite strong support arising from the trading during the latter part of 2019 and the first few months of 2020. 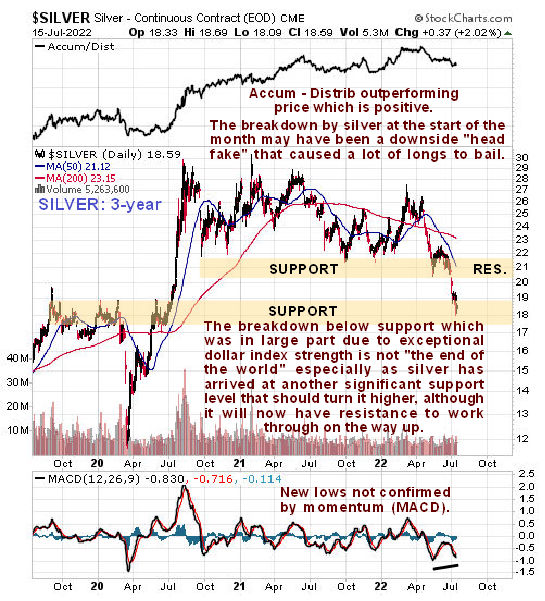 Now we come to the most compelling bullish factor of all for silver which is its latest COT and in looking at it we should take into account that it doesn’t factor in the quite sharp drop on Thursday. This chart shows that the Large Specs have at last almost completely given up on silver, with their long positions shrinking to almost non-existent levels so it is clear that the breakdown at the start of the month caused the last diehards to finally throw in the towel. This is viewed as very bullish, because the best way of making money is to do the opposite of what the Large Specs tend to do collectively, which is otherwise known as being a contrarían. 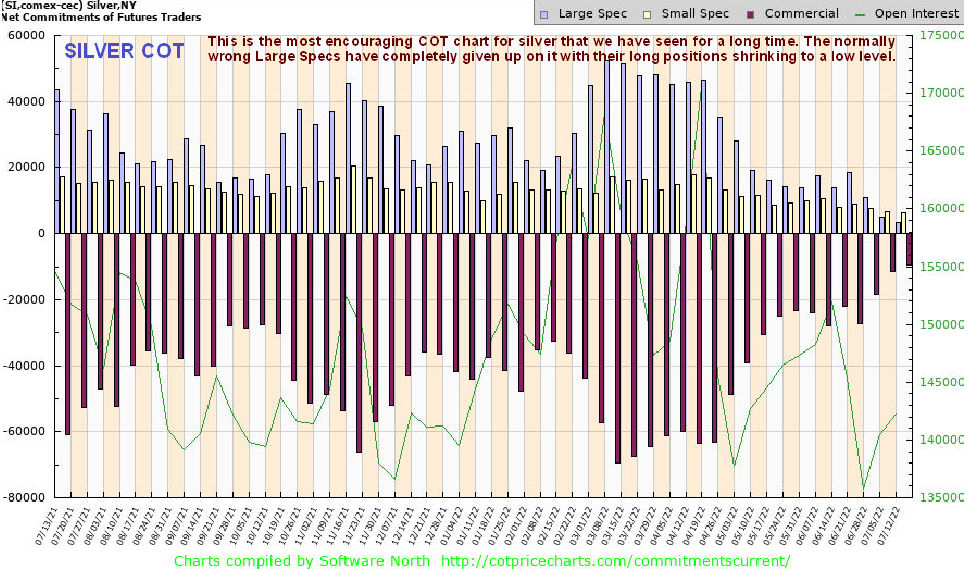 The conclusion is that even though the silver charts look superficially scary, the outlook for it is better than it has been for a long time, which fundamentally makes sense if the Central Banks are about to wade in Big Time to stop the debt market from imploding leading to a systemwide lock up, because this intervention will of course involve the creation of vast amounts of new money that will be massively inflationary.