Global Bonds Surge in Best Month Since 2020 on Recession Fears 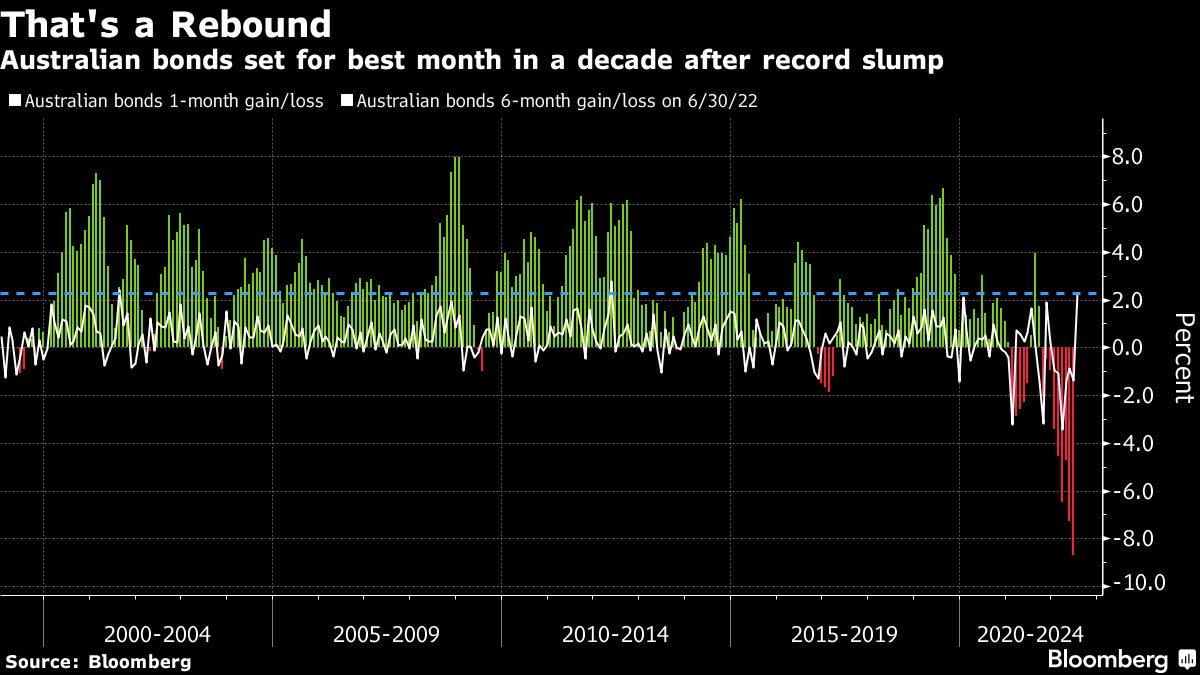 (Bloomberg) — Inflation is so first half, as least as far as bond investors are concerned.

Global bonds are headed for the biggest monthly gain since November 2020 — with a Bloomberg index surging 1.8% — as the market’s focus switches to a fear of recession amid rapid Federal Reserve interest-rate hikes. That’s a far cry from the previous six months, when the strongest inflation prints for a generation drove the gauge to a cumulative 14% loss.

Fed Chair Jerome Powell’s signal Wednesday that tightening may slow depending on economic data only added to the rebound. A report the following day showing the US economy shrank for a second quarter looks to have all but confirmed a global contraction as the new base case for investors, one that’s expected to curtail the uptrend in consumer prices.

“History tells us that recessions tend to lead to lower inflation,” Societe Generale SA strategists including Subadra Rajappa in New York wrote in a report. “Global bonds staged an impressive rally as a dovish Fed and weaker data continued to stoke recession fears. Markets were quick to price out Fed and European Central Bank rate hikes for the upcoming year, relying on higher policy rates and demand destruction to rein in inflation.”

Australia’s government and corporate bonds have surged 2.4% in July, set for the biggest monthly gain since May 2012. That doesn’t even include Friday’s gains following the US gross domestic product data, which has sent yields on 10-year government bonds sliding as much as 18 basis points. The index had tumbled 9.5% in the first half, with losses exacerbated by a series of central-bank policy missteps.

Globally, corporate bonds are among those leading gains. An index tracking euro-denominated investment-grade company debt has returned 4.7% in July, set for a record monthly gain. US currency debt from emerging Asian high-grade issuers is heading for the best month since November 2020.

Still, some analysts and investment strategists have warned the rally in high-grade corporate bonds may fade fast due to the risk of recession in some major economies, persistent distress in Chinese credit market and rising default risks.

Not everyone is convinced the rebound will last.

“I can’t help but think this is a bout of a relief rally rather than the start of a bit re-pricing in rates,” said Skye Masters, head of fixed-income research at National Australia Bank Ltd. in Sydney. “The risk for the market is that the Fed does not start easing policy as early as expected and inflation remains elevated.