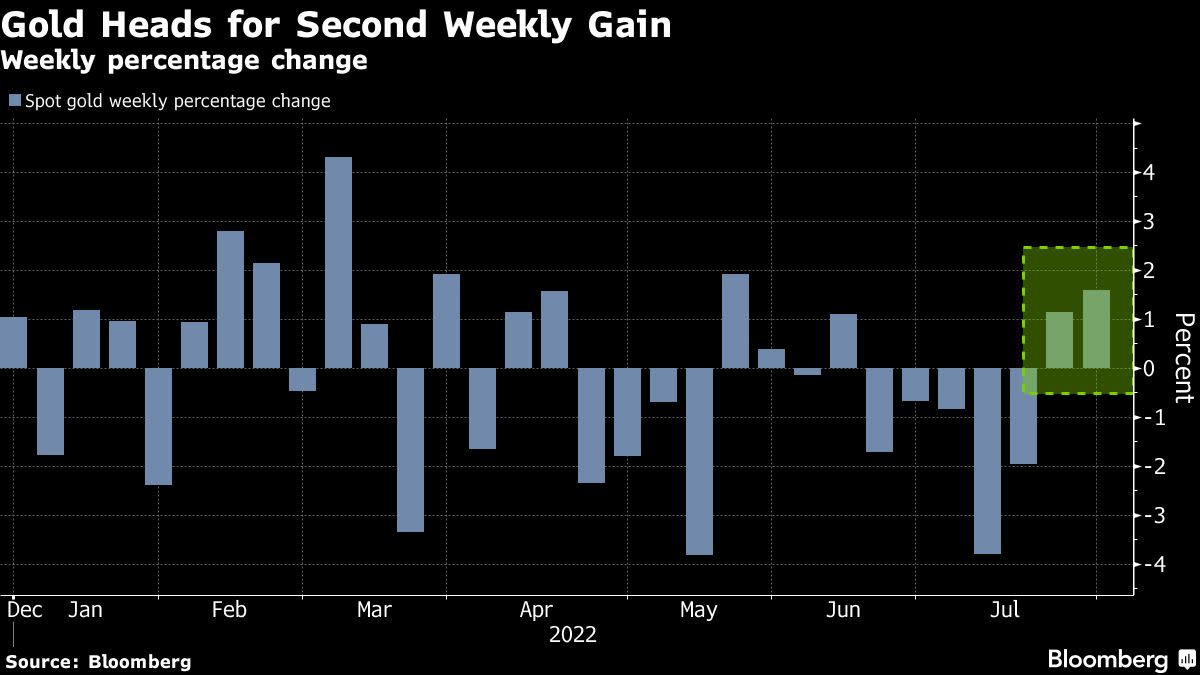 (Bloomberg) — Gold headed for its biggest weekly gain since March amid speculation that the Federal Reserve will slow the pace of interest rate increases as the US economy slows.

Bullion’s climb, supported by a weaker dollar and declining Treasury yields, saw prices hit a three-week high and puts the haven asset on pace for a second straight weekly gain. While the Fed raised rates by 75 basis points again this week, data showing that the US is in a technical recession signaled that the central bank could become less aggressive as it continues to combat inflation.

Despite the recent rebound, gold remains on track for a fourth straight monthly loss, with bullion-backed exchange-traded funds set for the biggest monthly outflow since March 2021. Treasury Secretary Janet Yellen gave a glass-half-full assessment of the economy, acknowledging a slowdown she called necessary to tame inflation while rejecting the notion the country had entered a recession.

“Gold bugs are falling like dominoes, but given the slowing trend in growth, Chair Powell catalyzed a short covering rally across all assets by tying a jumbo-sized September hike to data. Gold markets are set-up for additional price weakness to ensue,” TD Securities senior strategist Daniel Ghali said in a note.

Investors will turn their focus to next week’s monthly jobs report from the US government, which is forecast to show another solid month of hiring in July. Fed Chair Jerome Powell said the labor market remains “extremely tight,” referencing a near-record number of job openings and historically low unemployment.

“If the US economic data turn out to be weaker next week, gold is likely to make further gains,” Carsten Fritsch, an analyst at Commerzbank AG, said in a note. “This applies in particular to the report on the labor market, as Fed Chair Powell has still been describing the market as robust, which besides the persistently high inflation is another argument in favor of further rate hikes.”

The Bloomberg Dollar Spot Index fell 0.1% and is headed for a back-to-back weekly loss.