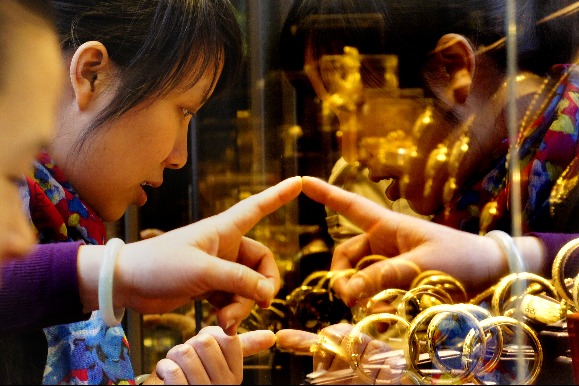 Inside a TSL jewelry outlet at Teemall, a landmark shopping complex in downtown Guangzhou, capital of Guangdong province, salespeople were busy sorting jewelry stock on Wednesday.

“An increased number of customers who have planned to get married recently or next year are taking advantage of gold prices falling to buy gold accessories and bars,” said a saleswoman surnamed Chen.

The international gold price has fallen for five consecutive weeks since June, hitting a new 10-month low, with the lowest at $1,698.80 per ounce on July 15.

The closing price saw a slight increase to $1,712.20 per ounce on Tuesday, said the Shanghai Gold Exchange.

Driven by the price decline, domestic consumption of gold has increased significantly, with the outlet’s sales volume expected to jump about 20 percent in July, compared with the previous month, Chen said.

Near Chen’s shop, other jewelry brands also witnessed an increased number of buyers and sales volumes in recent weeks.

“Customers who are going to marry have come to buy gold jewelry recently as the price of gold dropped,” said a salesperson at an outlet of Laofengxiang, a Chinese jewelry brand with a history of more than a century.

The salesperson, surnamed Zhu, said there have also been some customers buying gold bars as the price dropped significantly.

At Dongshan Department Store, overall sales including gold accessories and bars increased by about 40 percent from July 1 to July 17, compared with the same period last month, according to data from the store operator.

However, a frenzy of buying gold accessories and bars has yet to come as the peak season usually falls before the Chinese Lunar New Year, according to Zhu.

Also, there have not been many people visiting shopping malls due to the resurgence of the COVID-19 pandemic, according to Zhu.

“People who have bought our products recently are usually frequent buyers, who are often investors waiting for a price drop in gold,” she said, adding the outlet is expecting the peak season for selling gold jewelry to come during the second half.

Gold has become more popular as an investment option in China, as some believe it is immune to inflation.

“I couldn’t wait to buy gold. Many of my colleagues and friends have already made their purchases,” said Liang Weiquan, a 56-year-old Guangzhou resident who has already bought two gold necklaces and a five-ounce gold bar.

“If the gold price rebounds, it is more likely to rise in the months ahead with the arrival of the peak season of selling gold in the second half,” he said.

Gold bars of 100 grams and 50 grams at the Guangdong Gold store on Guangzhou’s Dongfengdong Road have been sold out. And sales of gold in July are expected to be more than 20 percent higher than last month, according to Zhu.

Gold trading volume climbed in China in the first quarter, increasing 2.6 percent year-on-year to 9,579.04 metric tons on the Shanghai Gold Exchange, according to a report issued by the People’s Bank of China.

Pei Xiying in Guangzhou contributed to this story.