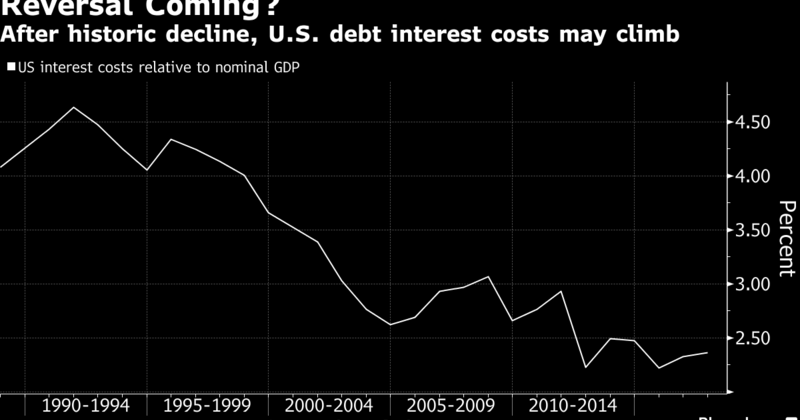 Last week, I penned a quick article suggesting that not everyone is getting rich off the stock market. It highlighted the most recent NY Fed report which featured, among other things, that U.S. household debt reached an all-time high in Q4 2017, some 17.9% above its most recent trough in Q2 2013. Further, that the segment with the largest gains was credit cards, with a 3.2% increase. The article went on to feature the sharp rise in the U.S. stock market over that same period and posited that, clearly, the rising tide was not lifting all boats. Finally, it raised the question of what this might portend for U.S. households should interest rates rise moving forward.

Today, Goldman Sachs is out with a piece suggesting the U.S. government faces exactly this same challenge. Here’s a quick picture from the linked Bloomberg article.

The Heisenberg, whose economic and geopolitical commentary I find most helpful, has recently featured the concept that current U.S. fiscal policy of piling stimulus in the form of tax cuts and rising deficits on top of an already-strong economy is extremely troubling, leaving us in uncharted territory. With that in mind, a quick quote from the above-linked Bloomberg article.

If current fiscal policies are extended, the Goldman analysts predict
that the U.S. net interest expense relative to GDP will exceed the
levels seen in the 1980s and early 1990s by 2027. And debt-to-GDP will
probably be higher than 100 percent, “putting the U.S. in a worse fiscal
position than the experience of the 1940s or 1990s,” they wrote.

Finally, for this quick piece, I will leave you with this little tidbit. Bloomberg also reports that the U.S, Treasury flooded the market with $179 billion of debt today, which has the effect of, according to the article, “helping to push up the rates that borrowers demand.”

Increasing debt into a cycle of rising rates. The Mueller investigation heating up. Tread carefully as you invest.