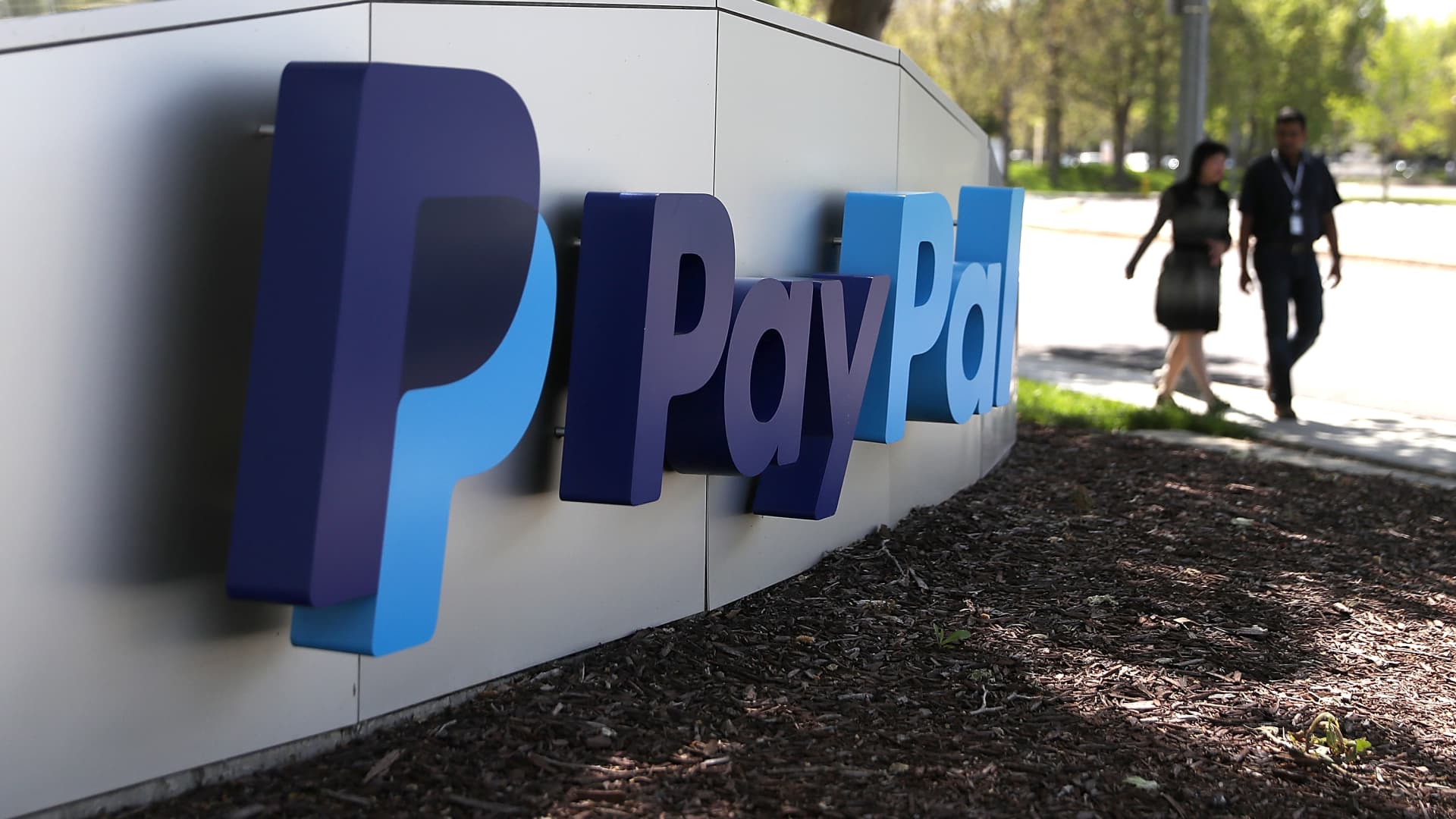 A sign is posted outside of the PayPal headquarters in San Jose, California.

Check out the companies making headlines in extended trading.

Match Group — Shares of the dating app operator tumbled as much as 23% after the company reported revenue of $795 million for the second quarter, compared with FactSet estimates of $803.9 million. Match also issued weak guidance around adjusted operating income and revenue for the current quarter.

SolarEdge Technologies – The solar-power stock tanked nearly 13% in after-hours trading following disappointing quarterly results. Solaredge reported an EPS of 95 cents, on a non-GAAP basis, below analysts’ expectations of $1.38 per share, according to FactSet. Revenue also came in shy of estimates.

PayPal — The payments giant’s shares soared 11% after hours following stronger-than-expected second-quarter results and an increase in its forecast. PayPal also revealed it has entered into an information-sharing agreement with Elliott Management.

SoFi — Shares climbed more than 7% after the personal finance company reported a beat on the top and bottom lines. “While the political, fiscal, and economic landscapes continue to shift around us, we have maintained strong and consistent momentum in our business,” SoFi CEO Anthony Noto said in a statement.

Airbnb — Shares of Airbnb fell about 10% in extended trading after the vacation home rental company posted weaker-than-expected revenue for the second quarter. The company also reported more than 103 million booked nights and experiences, the largest quarterly number ever for the company but short of StreetAccount estimates of 106.4 million.

Advanced Micro Devices — AMD’s shares fell nearly 5% despite reporting strong quarterly earnings and revenue, after the chipmaker issued a weaker-than-anticipated third-quarter forecast. The chipmaker said it expected $6.7 billion in revenue during the current quarter, plus or minus $200 million. Analysts expected $6.83 billion.

Caesars Entertainment — The casino company lost about 2% after it reported a quarterly loss of 57 cents per share, which was 74 cents lower than analysts had expected. It also reported a Caesars Digital loss of $69 million, compared with $2 million for the comparable prior-year period.

Robinhood — Robinhood slid about 2% after reporting it will cut its headcount by some 23%, after previously laying off 9% in April, and posting a decline in monthly active users and assets under custody for the second quarter. The investing app operator released its results a day ahead of schedule.

Starbucks — The coffee chain saw shares edge higher by more than 2% after it reported better-than-expected quarterly results, despite lockdowns in China weighing on its performance. Within the U.S., however, net sales rose 9% to $8.15 billion and same-store sales grew 3%.

Correction: Analysts expected SolarEdge Technologies to report earnings of $1.38 per share, according to FactSet. An earlier version of this story misstated the estimate.

Bounce Back From Crushing Disappointment