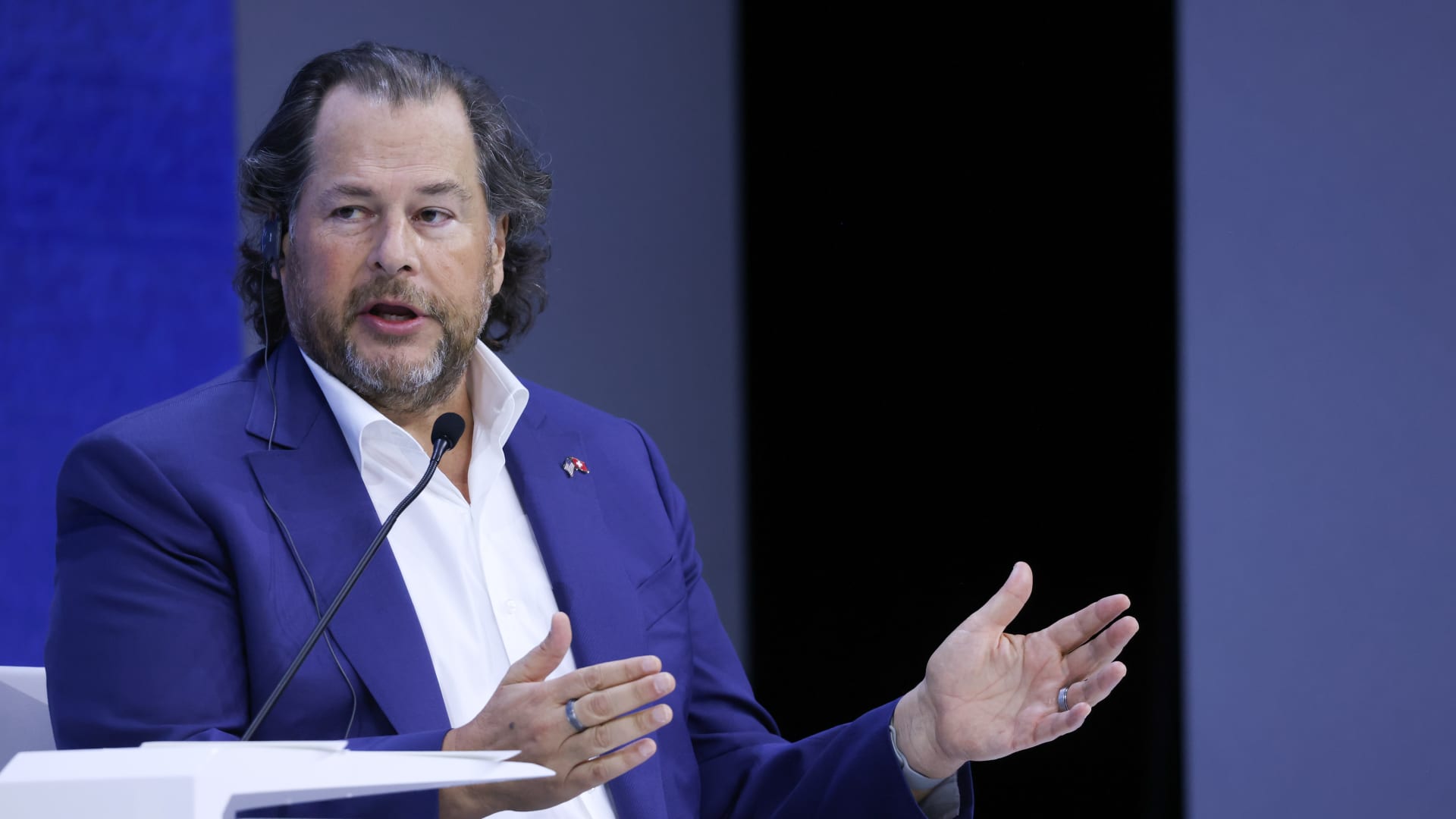 Salesforce’s revenue rose 24% year over year in the quarter, which ended April 30, according to a statement. Net income fell 94% to $28 million. The company saw lower gains on investments in the quarter, and sales and marketing expenses mounted.

Salesforce said revenue from its Service Cloud for handling customer-service inquiries generated $1.76 billion in revenue, up almost 17%. Revenue from the core Sales Cloud product for managing business opportunities contributed $1.63 billion, up about 18%.

Marc Benioff, co-CEO of Salesforce.com Inc., speaks on a panel session at the World Economic Forum in Davos, Switzerland, on Tuesday, May 24, 2022.

“We’re just not seeing material impact on the broader economic world that all of you are in,” Marc Benioff, Salesforce’s co-founder and co-CEO, said on a conference call with analysts. Still, the company is aware of macroeconomic uncertainty, including volatility in foreign-exchange rates, said Amy Weaver, the company’s finance chief.

In the quarter Salesforce said its Sales Cloud, Service Cloud and Marketing Cloud integrations for Slack were launching in beta. Salesforce acquired Slack for $27.1 billion in July. The company also announced the launch of Safety Cloud for organizing in-person events during the quarter, and its legal name changed to Salesforce Inc. from Salesforce.com Inc. Salesforce was founded in 1999, in the midst of the dot-com craze.

“In 2001 I think it really impacted us, we almost lost our business, because we were on monthly contracts, we didn’t have the right cash flow structure, investors just wouldn’t give us any money — and so we made a lot of changes then, and it really strengthened our business and made us more durable overtime,” he said.

In early March, after Russia invaded Ukraine, Salesforce said it began to end relationships with customers it has accumulated in Russia through resellers and other channels.

Salesforce said it had $13.64 billion in unearned revenue, which primarily comes from subscription billings. The figure was slightly below the StreetAccount consensus of $13.76 billion.

With respect to guidance, Salesforce said it sees fiscal second-quarter earnings of $1.01 to $1.02 per share on an adjusted basis and revenue from $7.69 billion to $7.70 billion. Analysts polled by Refinitiv had expected $1.14 in adjusted earnings per share on $7.77 billion in revenue.

The higher earnings guidance is “all driven by continued focus on disciplined decision-making across the organization, and as a company we are committed to continuing to improve profitability over the long-term,” Weaver said on Tuesday’s call.

She said higher adjusted operating-margin guidance is not tied to any single change.

“It’s really driven by disciplined decision-making, and unlock incremental efficiencies across the entire business,” Weaver said. “We’ve asked each leader to step up, to really look across their business and to strategically prioritize their investment, and this is only to make sure that we’re getting the highest-return for every dollar that we invest.”

The company is slowing down hiring, Insider reported earlier this month, citing a memo.

“We are hiring, but we’re doing it at a much more measured pace and focusing the majority of new hires that will support customer success and the execution of our top priorities,” Weaver said.

The company isn’t looking to make another big purchase at this point, Benioff said.

“We can see a rightsizing on a number of valuations I think that we’re all quite suspect of for quite a long time, but for us, you know, we’ve kind of laid our acquisition strategy down and we’re done for a while,” he said.

Notwithstanding the after-hours move, Salesforce stock has moved about 36% lower since the start of the year, while the broader S&P 500 index has declined 13% over the same period.

WATCH: Salesforce was born in the 2001 recession, says chairman and co-CEO Marc Benioff