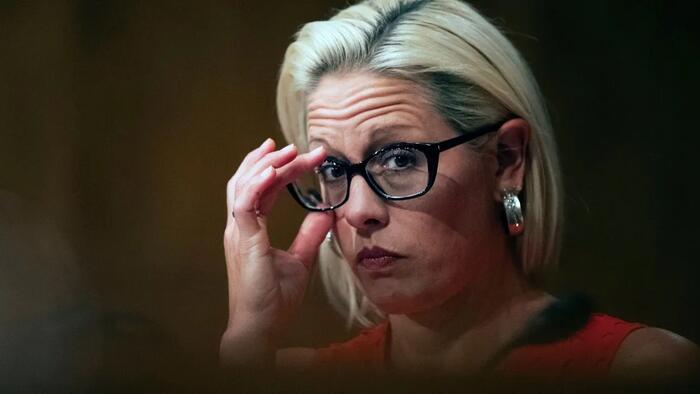 Arizona Senator Kyrsten Sinema – the lone Democrat holdout on the Biden administration’s revamped reconciliation bill – has finally signed off on it, after Democrats agreed to preserve the so-called carried interest loophole that allows investment managers (like her former bosses) to shield the majority of their income from higher taxes.

Last summer Sinema interned a winery owned by the co-founders of one of the biggest private equity firms in the world.

In fact, Sinema told donors at a Wednesday night fundraiser that it makes ‘no sense’ to squeeze the private-equity industry that will finance various projects for the roughly $1 trillion infrastructure and $280 billion semiconductor bills that were signed into law earlier, according to the Wall Street Journal, citing a lobbyist who attended.

“We have agreed to remove the carried interest tax provision, protect advanced manufacturing, and boost our clean energy economy in the Senate’s budget reconciliation legislation,” Sinema said in a statement, adding that she would move forward with the legislation following a review by the Senate’s parliamentarian – who will rule on whether elements such as domestic content requirements for cars eligible for EV tax credits, caps on insulin, and other provisions, meet strict budget rules.

That said, she promises to someday crack down on the carried interest loophole she so vehemently fought for.

“Following this effort, I look forward to working with Senator Warner to enact carried interest tax reforms, protecting investments in America’s economy and encouraging continued growth while closing the most egregious loopholes that some abuse to avoid paying taxes,” she said, the Journal reports.

Centrist Sen. Joe Manchin (D., W.Va.) and Senate Majority Leader Chuck Schumer (D., N.Y.) announced a deal last week to raise $739 billion in new revenue and spend $433 billion on climate, energy and healthcare programs over 10 years, reviving a package they thought was dead. Now, Democrats are trying to keep the bill on its narrow track to passage this month through the 50-50 Senate.

And while the Biden administration has promised that the “Inflation Protection Act” won’t increase taxes on those making under $400,000, BofA (and many, many others) say fat chance.

The deal with Sinema also includes a new excise tax on stock buybacks that’s expected to raise more than the $14 billion that would have been raised if the carried-interest loophole had been eliminated.

The deal struck by Sinema, a pivotal Democratic vote in the Senate, would pare back a proposed 15% corporate minimum tax by creating an exemption for depreciation tax deductions. This change was urged by manufacturers.

The estimated $100 billion revenue hole created by this new exemption would be made up for with a new 1% excise tax on stock buybacks according to people familiar with the talks.

The excise tax on companies when they buy back their own stock would raise roughly enough to cover the tax revenue that is forgone by nixing the carried interest provision and narrowing the corporate minimum tax. –Bloomberg

The deal with Sinema includes a new excise tax on stock buybacks that will bring in more than the $14 billion raised by the carried interest provision, according to a Democrat familiar with the agreement. The deficit reduction figure remains about $300 billion.

The excise tax on buyback roughly makes up for the exemption on the corporate minimum tax and elimination of the carried interest tax provision.

Sinema’s change of heart came after a lengthy discussion with Sen. Joe Manchin (D-WV), who along with Sinema had been holding up previous iterations of the Democrats’ massive reconciliation packages.

Here’s Sen. Manchin talking with Sen. Sinema in the Senate.

They started talking at 2:58pm. pic.twitter.com/MHBz6ZNmNa

Below: Sinema’s statement, and one from Senate Majority Leader Chuck Schumer (D-NY).

SCHUMER: “I am pleased to report that we have reached an agreement on the Inflation Reduction Act that I believe will receive the support of the entire Senate Democratic conference.” pic.twitter.com/HoRafLWiPm

The parliamentarian’s review has reportedly been underway and could drag into the weekend – after which Democrats will face an amendment process called a vote-a-rama, in which lawmakers can “offer and force votes on as many amendments as they can physically sustain in one sitting,” reads the Journal, which adds that these can last all night.

And since corporations don’t pay taxes, that excise tax bill will be passed along to consumers in the form of even HIGHER prices.