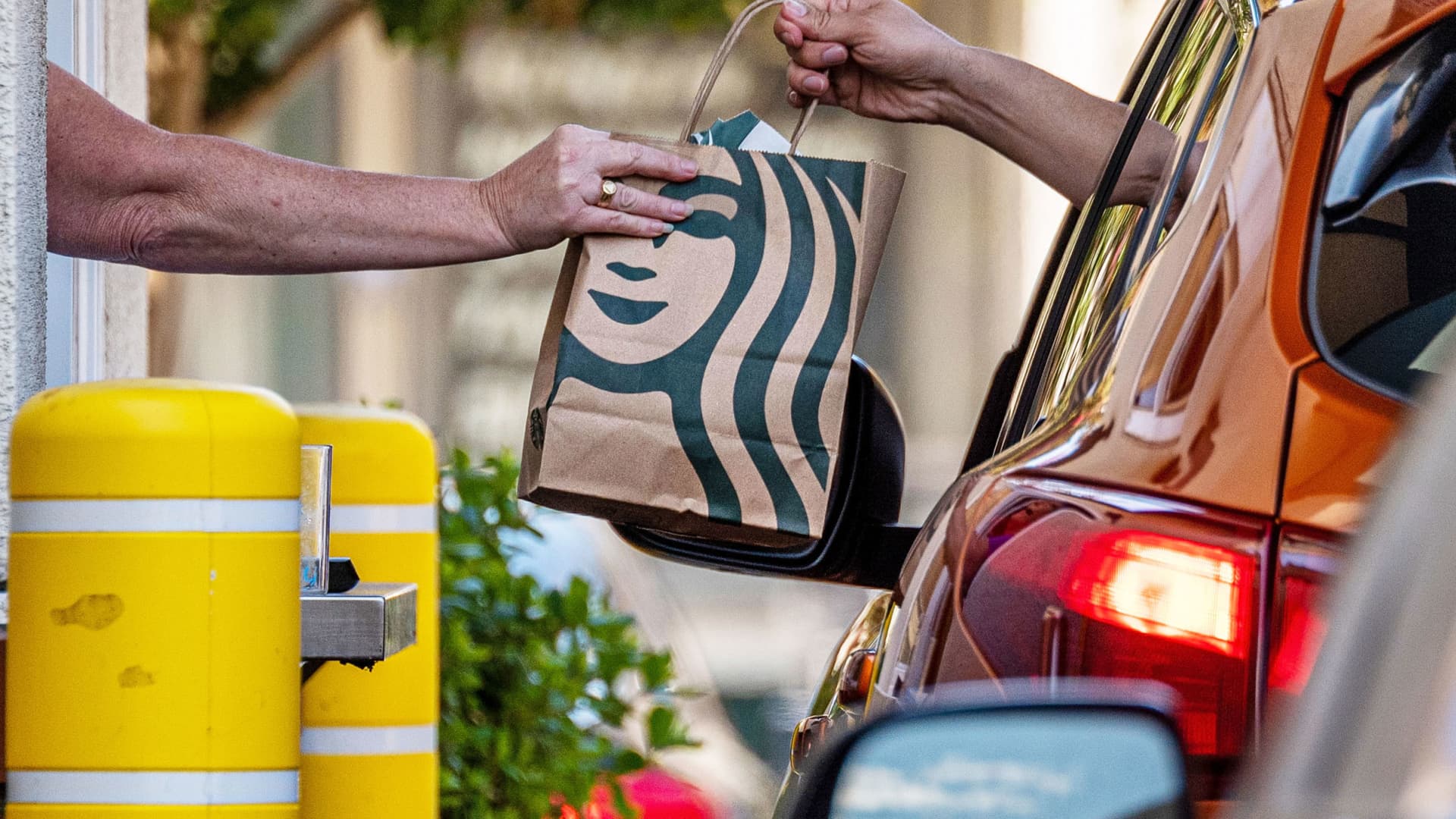 An employee hands a bag to a customer at the drive-thru of a Starbucks coffee shop in Hercules, California, on Thursday, July 28, 2022.

Starbucks on Tuesday reported better-than-expected quarterly earnings and revenue, fueled by demand in the U.S. for its cold coffee drinks.

As inflation surges, interim CEO Howard Schultz said the chain is not seeing customers trade down or reduce their spending. Other restaurant companies, including McDonald’s and Chipotle Mexican Grill, have seen low-income consumers visit less frequently or spend less as higher gas and grocery bills squeeze their budgets. Schultz credited Starbucks’ pricing power and customer loyalty for its ability to buck the trend.

Shares of the company rose more than 1% in extended trading.

Here’s what the company reported for the quarter ended July 3 compared with what Wall Street was expecting, based on a survey of analysts by Refinitiv:

The coffee giant reported fiscal third-quarter net income attributable to Starbucks of $912.9 million, or 79 cents per share, down from $1.15 billion, or 97 cents per share, a year earlier. The company said that inflation and higher wages for baristas weighed on its margins this quarter.

Net sales rose 9% to $8.15 billion. The company reported global same-store sales growth of 3%, fueled by a stronger performance in the United States.

In Starbucks’ home market, same-store sales increased 9%, driven largely by higher average order totals, as well as a 1% uptick in traffic. Morning sales are returning, the company said, making up roughly half of revenue as consumers resume pre-pandemic routines.

The company also noted the popularity of its iced shaken espresso and said cold beverages accounted for three quarters of U.S. sales this quarter. Schultz said customers are more likely to add modifiers like syrups and milks to cold drinks than hot drinks, raising the price of the overall beverage. Cold drinks are also popular with Gen Z customers, a key demographic for the coffee chain, according to Schultz.

Outside the U.S., same-store sales fell 18%, weighed down by plummeting demand in China. Starbucks said Covid restrictions affected sales in its second-largest market for two-thirds of the quarter. As a result, China’s same-store sales plunged 44%. The company is still seeing periodic short-term closures in China.

Last quarter, Starbucks pulled its outlook for fiscal 2022, citing the uncertainty caused by Covid outbreaks in China. The company did not issue a new forecast this quarter.

The company plans to hold an investor day on Sept. 13 in Seattle to share more about its strategy for the future.