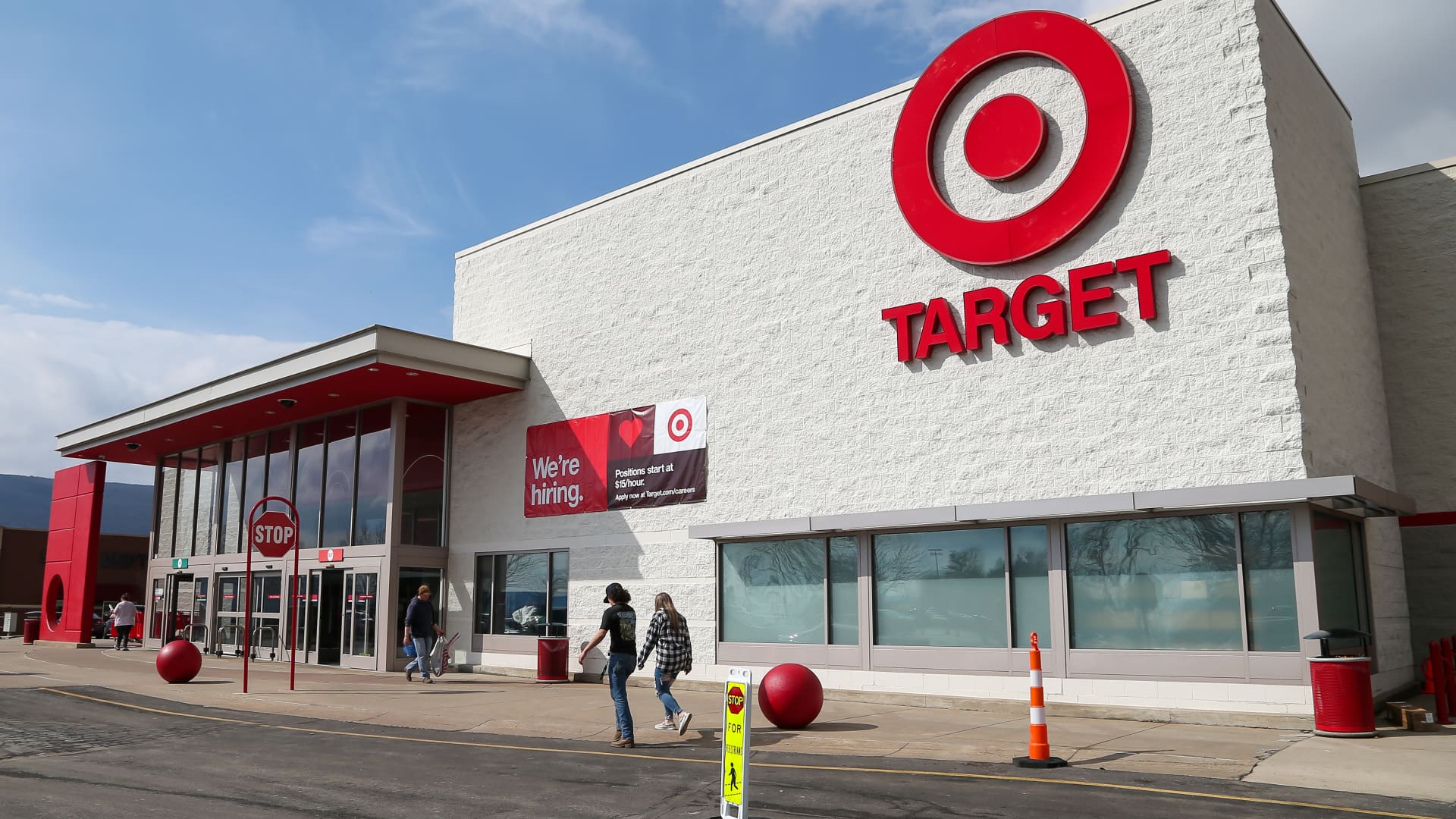 Target warned investors Tuesday that its profits will take a short-term hit, as it marks down unwanted items, cancels orders and takes aggressive steps to get rid of extra inventory.

The retailer slashed its profit margin expectations for the fiscal second quarter to account for a wave of goods winding up deeply discounted or on the clearance rack.

“We thought it was prudent for us to be decisive, act quickly, get out in front of this, address and optimize our inventory in the second quarter — take those actions necessary to remove the excess inventory and set ourselves up to continue to be guest relevant with our assortment,” CEO Brian Cornell said in an interview with CNBC.

Shoppers walk in front of a Target store at the Lycoming Crossing shopping plaza in Muncy, Pennsylvania.

By taking swift action, Cornell said Target can fend off further pain and make room for merchandise that customers do want, such as groceries, beauty items, household essentials and seasonal categories like back-to-school supplies. He said the company’s stores and website are seeing strong traffic and “a very resilient customer,” but one who no longer shops popular Covid pandemic categories.

“We want to make sure that we continue to lean into those categories that are relevant today,” he said.

In the back half of the year, Target anticipates profit margins will be in a range around 6% — better than its average performance for the fall season in the years before the pandemic began. The company said it still expects revenue growth to be in the low to mid single digits for the full year and to maintain or gain market share in 2022.

Retailers from Walmart to Gap face a glut of inventory as inflation-pinched shoppers skip over categories that were popular during the first two years of the pandemic. Gap, for instance, said customers want party dresses and office clothes instead of the many fleece hoodies and active clothes the company has. Walmart said some families are making fewer discretionary purchases as the prices of gas and groceries rise. Abercrombie & Fitch and American Eagle Outfitters both reported a steep jump in inventory levels, up 45% and 46%, respectively, from a year ago from a mix of items not selling and supply chain delays easing.

The extreme shift in consumers’ spending habits comes as retailers start to get back to healthy in-stock levels. That means some have an abundance of sweatpants, throw pillows and pajamas just as consumers search for swimsuits and suitcases. Plus, some shoppers are trimming back on spending due to inflation or putting more of their dollars toward experiences like dining out and traveling.

Cornell said Target decided to roll out its new inventory plan after hearing retail competitors had similar woes. He said the company also wanted to get ahead of key sales seasons, such as back-to-school and the holidays, when stale merchandise could clutter stores and drive away customers.

Target said it had nearly $15.1 billion of inventory as of April 30, the end of the fiscal first quarter. That’s about 43% higher than in the year-ago period.

Target shocked Wall Street on May 18 with a wide earnings miss for the fiscal first quarter, as it got hit by fuel and freight costs, higher levels of discounting, and a rotation away from items like TVs, small kitchen appliances and bicycles. Its shares fell nearly 25%, marking the company’s worst day on Wall Street in 35 years.

Walmart missed earnings expectations, too. Its inventory levels were up about 33% compared with a year ago. Walmart U.S. CEO John Furner said at an investor event on Friday that about 20% of that is merchandise the retailer wishes it did not have. Roughly a third is additional inventory to help the retailer restock key items. He said it will be “a couple of quarters to get back to where we want to be.”

That company’s shares also fell after Target’s announcement on Tuesday. Walmart’s closed at $123.37, down 1.2%.

Cornell said Target is sorting through its inventory, deciding in some cases to pack away merchandise to sell at full price in the future and in other cases to promote or come up with ways to sell through it now.

For instance, he said, Target had a big sales event over Memorial Day weekend to clear bulky outdoor items like patio furniture out of its backrooms. It also got additional space near U.S. ports to hold merchandise, so it has a place to move goods — some of which are arriving too early or too late.