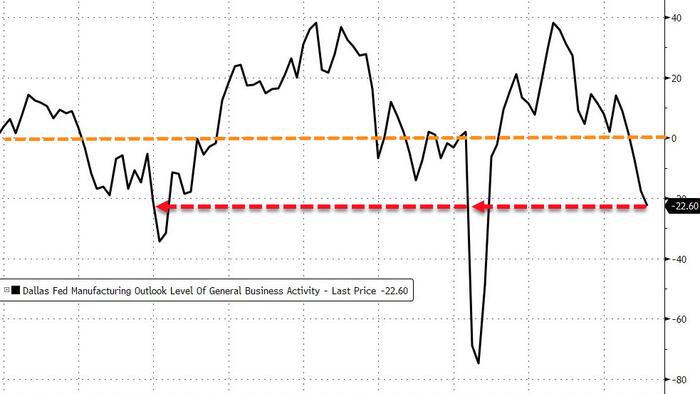 Another day, another set of disappointing data confirming the ‘r’ word is imminent. Both the Dallas Fed and Chicago Fed dropped some truth bombs in their surveys of local and national (respectively) economic activity.

The Dallas Fed Manufacturing Outlook Level of General Business Activity tumbled further in July, dropping to -22.6 from -17.7 (and worse than expected)…

New Orders and Inventories were the biggest driver of the further weakness, and CapEx fell for the 4th straight month, but it is the comments from survey respondents to the Texas Manufacturing Outlook survey that paint a truer picture than a single headline data point… (emphasis ours)

Shifting from local pain to national pain, The Chicago Fed’s National Activity Index signaled a second straight month of contraction in June (first time since early 2020). The smoothed index dropped into negative territory for the first time since May 2020.

The index utilizes 85 individual indicators covering four broad categories of data: production and income; employment, unemployment, and hours; personal consumption and housing; and sales, orders, and inventories. In June, 41 of the 85 made a positive contribution while 44 made negative contributions.

Production-related indicators weighed on the overall index in June. The personal consumption and housing category was also negative.

Meanwhile, the sales, orders, and inventories category, as well as the employment-related indicators, made a slight positive contribution.

Finally, we note that it could be worse… here’s Chinese Consumer Confidence…

Which is plunging even faster than Biden’s approval rating…

How soon after Thursday’s GDP release will Powell be thrown under the bus?