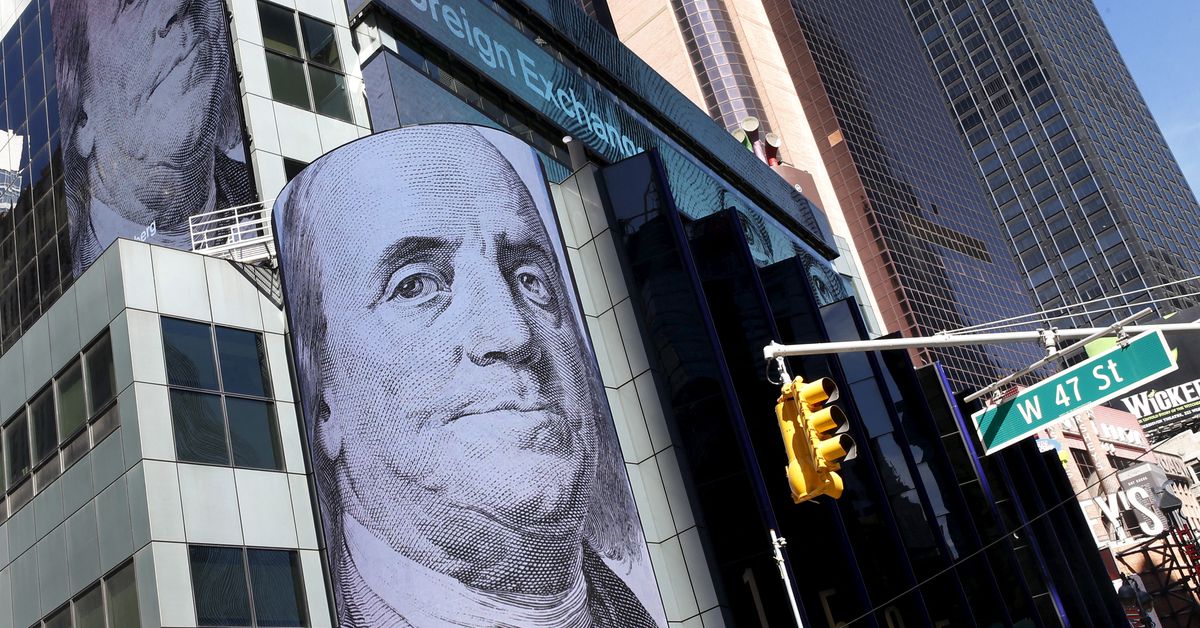 Images and market data is displayed on digital display signs on the exterior of the headquarters of Morgan Stanley at 1585 Broadway in New York’s Times Square, September 16, 2015.REUTERS/Mike Segar

NEW YORK, July 14 (Reuters) – Wall Street’s biggest banks sounded cautious on economic headwinds ahead, reducing risk in certain areas as they assess the likelihood and severity of recession, with JPMorgan’s Jamie Dimon likening the environment to a coming “storm.”

“The environment – if I had to use one word to describe it, it would be complicated,” said Morgan Stanley Chief Executive James Gorman, citing the conflict in Ukraine, interest rate increases, economic threats and other factors.

“I think it’s important to say, though, it is not 2008 complicated. This is a different type of financial stress in the system. And frankly, the banking sector is much stronger than it was going into the last time.”

Citigroup and Wells Fargo & Co report their earnings on Friday.

JPMorgan’s Dimon said the bank had been “managing certain exposures” such as reducing bridge loans and avoiding subprime lending. “We’re quite careful about how we run the risk of the company… It’s just going to go through a storm.”

Morgan Stanley’s Gorman said his team in fixed income and equities have been “prudent” versus competitors. When pressed why the bank was not using its excess capital to ramp up its fixed income business, Gorman said he was more comfortable keeping the cash spare, given the uncertain environment.

While Dimon steered clear of saying how hard the economy would be hit, he said the range of outcomes was a “soft landing to a hard landing” driven by how much the U.S. Federal Reserve hikes interest rates to tame inflation.

Inflation remains the clear sore spot for a U.S. economy that, in the words of one Federal Reserve official, has become something of a “puzzle.”

“The labor market continues to be very strong, but the real economy appears to be faltering,” Fed Governor Christopher Waller said in a speech on Thursday. He said he has confidence that the economy can withstand stiff interest rate increases.

Dimon listed as the headwinds the Fed’s quantitative tightening, volatile markets, the crisis in Ukraine and impact of that on food and energy prices.

Despite that, spending by JPMorgan consumers is still healthy with combined debit and credit spend up 15% from last year, executives said.

Chief Financial Officer Jeremy Barnum said they are beginning to see the impacts of inflation on spending, however, with a greater portion of spend going to gas and non-discretionary bills compared to the year-ago period.

Spending is growing faster than incomes, and median deposit balances fell across the board for the first time since the pandemic started, Barnum said.

Bank of America Institute senior economist David Tinsley said as inflation pushes the price of gas and groceries higher, a greater share of customer spending is going to those categories, particularly among lower income customers.

“This very high level of U.S. inflation is eroding real spending power,” Tinsley said. Still, Bank of America’s customer data shows, “There is quite a lot of cushion left.”

Nonetheless, consumer spending drives roughly two-thirds of the U.S. economy, and if consumers pull back, it could accelerate the country’s shift into a recession, executives and economists agreed.

There are signs that the Fed’s aggressive rate-hikes are causing home-buyers to put off purchases. The average rate on a 30-year fixed-rate mortgage was 5.51%, Freddie Mac said Thursday.

Jan Bellens, global banking and capital markets leader at EY, said that if consumers pulling back from buying houses accelerates the onset of a recession, they will have more money later to pull out of it.

“A recession isn’t good for anyone, but this is still the better option than further indebting consumers,” Bellens said. “This might also mean the recession is less severe and shorter than we’ve seen in the past.”