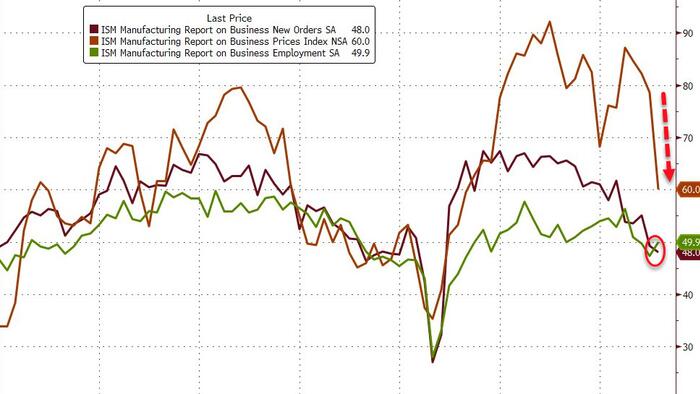 With broad weakness in ‘hard’ economic data and ‘soft’ survey data coming fast and furious, it was no surprise that S&P Global’s US Manufacturing PMI fell further intramonth to 52.2 in July from 52.7 in June – the lowest since July 2020. On the other hand, ISM Manufacturing beat expectations, falling from 53.0 to 52.8 (the lowest since June 2020) but that was better than the expected 52.0.

According to S&P Global, firms continued to pass-through higher costs to clients, as output charges rose at an historically elevated pace. The decrease in new order inflows was accompanied by a weakening of payroll growth to the lowest for six months.

Both employment and new orders remain in contraction (below 50)…

“With the exception of pandemic lockdown periods, July saw US manufacturers report the toughest business conditions since 2009. A growth spurt in the spring has quickly gone into reverse, with new orders for factory goods down for a second straight month in July, leading to the first drop in production for two years and sharply reduced employment growth.

“The rising cost of living is the most commonly cited cause of lower sales, as well as the worsening economic outlook.

“Companies are also taking an increasingly cautious approach to purchasing and inventories amid the gloomier outlook, and likewise appear to be cutting back on investment, with new orders falling especially sharply for business equipment and machinery in July.

Most notably, this appears to be the most market-moving aspect of the survey:

“Supply chain problems remain a major concern but have eased, taking some pressure off prices for a variety of inputs. This has fed through to the smallest rise in the price of goods leaving the factory gate seen for nearly one and a half years, the rate of inflation cooling sharply to add to signs that inflation has peaked.“

Finally, firms’ expectations regarding the outlook for output over the coming 12 months remained at their lowest since October 2020 amid inflation and supply chain concerns, as well as a gloomier global economic outlook.