Worried About A Market Downturn? Protect Yourself With This ETF 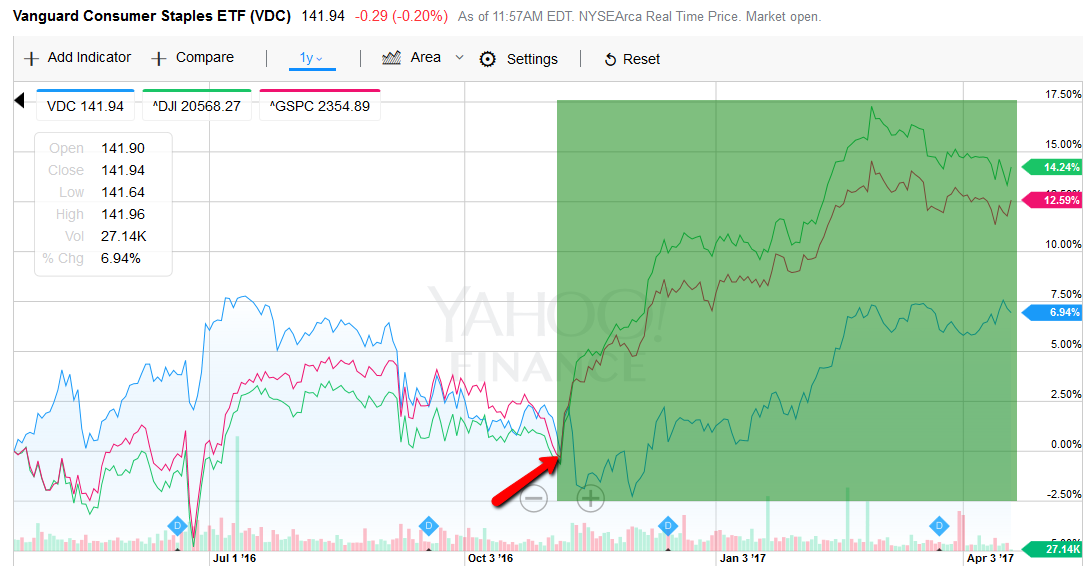 Based on a recent investment outlook from Vanguard, I wrote an article
offering some suggestions on how
to position your portfolio for the remainder of 2017. In the article, I
made the following observation:​

If you have been heavily invested in U.S. stocks, likely
your portfolio has performed extremely well of late, particularly since Donald
Trump’s surprising win in the presidential election. Following an initial
overnight drop in futures in the early-morning hours on November 9, the markets
rocketed upwards once they opened and, more or less, have not stopped since. At
their closing prices on March 31, the Dow was up 12.7%, the S&P 500 up
10.4% and the Nasdaq up a whopping 13.8% from their respective closing prices
on November 8, 2016.

However, I went on to note some of the reasons Vanguard offered to suggest
that, at best, market returns will be muted for the foreseeable future. Along
with that, I shared the view of several market commentators who believe
valuations are currently stretched very thinly.

If, like I am, you are concerned that we could be in for a correction and
yet do not want to completely divest your stock holdings, I have an ETF for you
to consider.

It’s the ​Vanguard
Consumer Staples ETF (VDC). Based on the idea that “a
picture is worth a thousand words,” take a look at the following picture
and then I will join you again below.

This 1-year chart features VDC (in blue) overlaid against the Dow Jones
Industrial Average (in green) and the S&P 500 Index (in red). Now focus on
the area shaded in green. That’s the period referred to in that opening quote.
Interestingly, when viewed from the perspective of the most recent full year,
the red arrow points to an inflection point, ironically, right around the time
of Trump’s election. Quite clearly, VDC has underperformed since that
time. However, there’s a flip side to this that may be worthy of consideration.

As you can quickly gather from its name, VDC focuses on the consumer staples
sector. As it turns out, this sector is particularly helpful in protecting your
portfolio in the event of a market downturn. In brief, Consumer Staples is the
term given to products, and the companies which produce these, that are
considered essential, such as food, beverages, household items, and
tobacco. These are the sorts of items that people need to function each and
every day and therefore are generally unable to cut out of their budget even in
bad times.

Have a look at some of the high-level characteristics of VDC: 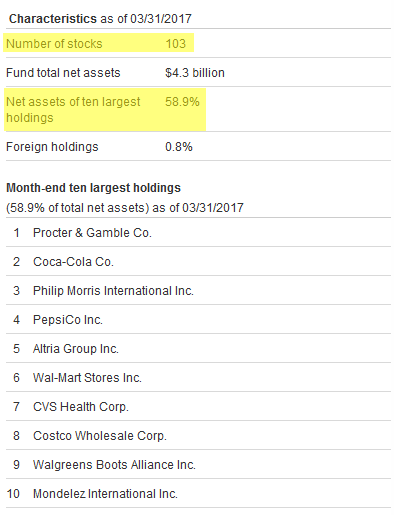 You will note VDC is a fairly concentrated ETF. While it contains a total of
103 stocks, 58.9% of its assets are represented by its 10 largest holdings.
Take just a minute to think about the characteristics of those names. In good
times and bad, people will be walking into CVS, Wal-Mart, Walgreens
and Costco. Once in the stores, they will be purchasing daily essentials
manufactured and distributed by Proctor & Gamble, Coca-Cola, PepsiCo
and, yes, Philip Morris and Altria.

So there you have it. A measure of protection for your portfolio in the event
of a market downturn. Oh yeah, and the most recent 30-day SEC yield for VDC was
2.43%. So you get a little income as well. Not bad, eh?

If you’re interested in a little further reading, here’s a link to a previous
article I wrote covering the consumer staples sector in general, as well as
two worthy competitors to VDC.