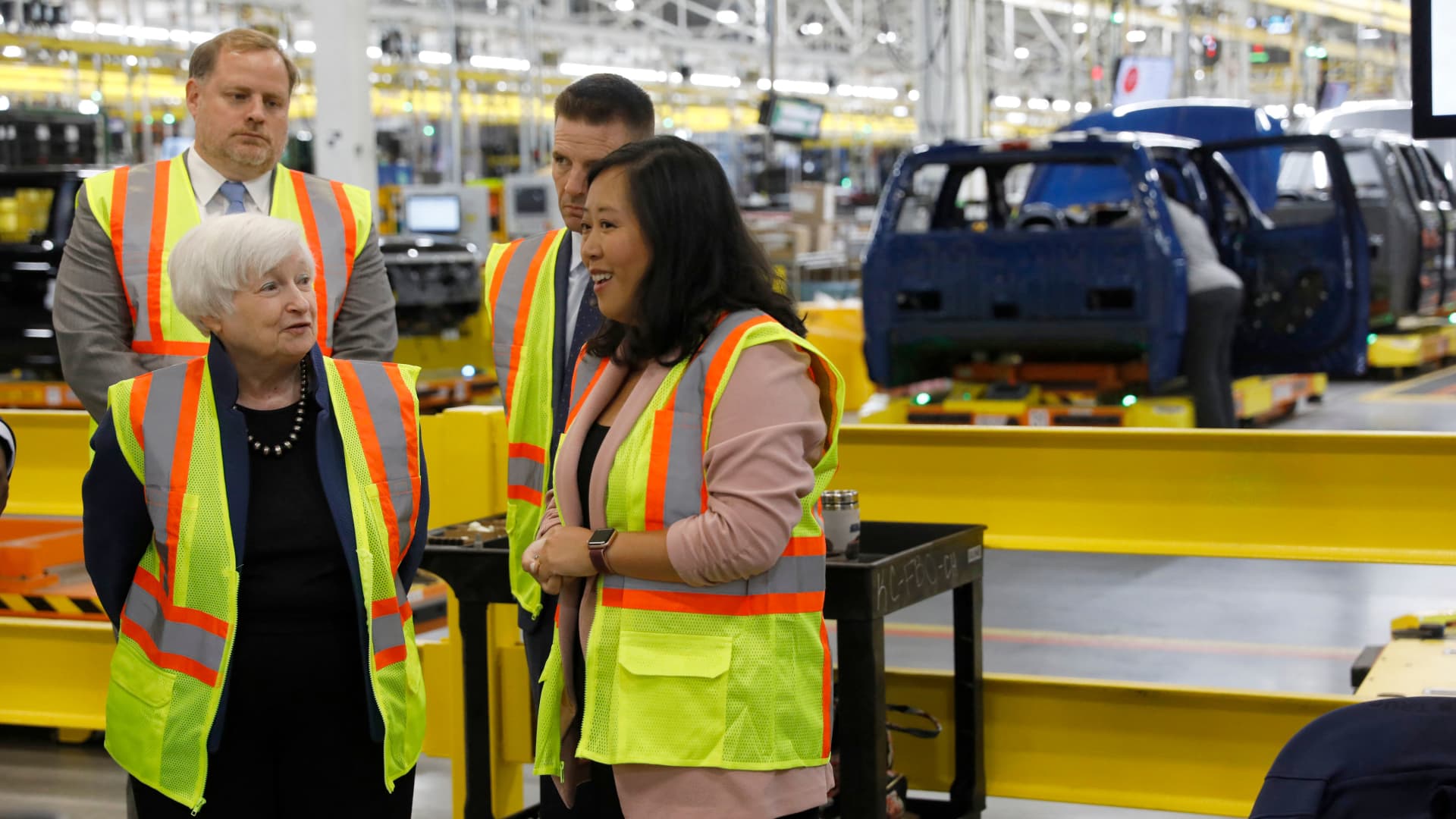 Yellen, who spoke following a tour of the Rouge Electric Vehicle Center in Dearborn, touted the Democrat-led Inflation Reduction Act, the bipartisan infrastructure law and the CHIPS and Science Act as boons to the manufacturing sector and job growth.

Her speech came as Democrats aim to highlight their economic successes ahead of the midterm elections in November, which will determine whether Republicans can retake one or both chambers of Congress. President Joe Biden will travel to Ohio on Friday to promote the opening of an Intel semiconductor manufacturing facility.

Many of the administration’s policies conform to Yellen’s so-called Modern Supply Side Economics framework. Before the pandemic, she said, higher inequality was accompanied by slower economic growth.

“And now with an economy at full employment, we are uniquely suited for a supply-side expansion that delivers sustainable growth and reduces inequality,” Yellen said.

She also noted the Biden administration’s stabilization efforts “will put the United States back to full employment in record time” after the pandemic, declining labor force participation and the war in Ukraine weighed down the U.S. economy.

“Taken together, the bipartisan infrastructure law, the CHIPS Act, and the Inflation Reduction Act authorized among the most significant investments our country has ever made,” Yellen said. “I believe firmly, they will help us achieve stable sustainable growth, and they’ll move us toward a fairer and more resilient economy.”

Yellen attributed an economic turnaround during the pandemic to one of President Joe Biden’s political priorities upon entering the White House.

“Due to the American Rescue Plan and our vaccination campaign, the United States experienced the fastest pace of job creation in our history,” she said. “Household balance sheets are strong, and businesses continue to invest.”

Biden signed the $1.9 trillion pandemic relief package into law in March 2021, authorizing payments of up to $1,400 for most Americans, extending $300 per week in unemployment insurance and expanding the child tax credit. The package also included $20 billion for Covid-19 vaccinations and millions in rental assistance.

The unemployment rate returned to its pre-pandemic level in July and tied for the lowest level since 1969 for every demographic group but African Americans, according to data from the Bureau of Labor Statistics.

During her visit, the Treasury secretary also visited small businesses that are recipients of Detroit’s Motor City Match grant program. Expansion of that program was made possible with $15 million in American Rescue Plan funding.

Republicans have hammered Democrats for passing the legislation, saying the massive injection of government aid helped to fuel inflation.

The $80 billion allotted to the IRS under the Inflation Reduction Act to enforce compliance of a 15% minimum tax on large corporations will help correct a two-tiered tax system “by ensuring that large corporations and high-income earners cannot avoid paying the taxes they owe,” Yellen said.

The tax cap — the amount of money owed but unpaid to the IRS — will add up to $7 trillion over the next decade and is “disproportionately concentrated among higher earners,” she said.

The resources from the IRA “will enable the IRS to increase audits of taxpayers at the high end and collect taxes from those who have not paid their full bill,” Yellen said.

The GOP also has targeted the tax increases included as part of the bill, which Democrats aim to use to pay for massive investments in mitigating climate change.

The CHIPS Act, a Biden-backed bipartisan law that makes a historic investment in domestic semiconductor manufacturing, will enable the U.S. to compete economically with China and other nations that have historically invested more in research and development, Yellen said.

“The United States now ranks 10th in the world in terms of R&D investments as a share of output,” she said. “The estimated cost [of] the retreat in public R&D is $200 billion per year in lost economic output. And meanwhile, competitors in China and the rest of the world are marching forward.”

Approximately $40 billion in incentives injected into the chip manufacturing sector will decrease foreign reliance on the technology necessary to make cars and other goods, Yellen said.

Yellen said the modern supply-side policies promoted by the Commerce Department and the White House are pro-growth as well as pro-fairness. The wealthiest Americans and large corporations benefited the most from tax incentives from past administrations, she said. But the Biden administration has focused on investing in disadvantaged communities.

“In layman’s terms, this approach embraces the notion that some of the best opportunities for growth occur when we invest in people in places that have been forgotten and overlooked,” Yellen said.

The Treasury secretary said the Commerce Department will establish at least 20 technology and innovation hubs “geographically dispersed with priority for underserved and underrepresented communities.”

“Such dispersal of economic opportunity across the country will mean good new jobs and industries,” Yellen said.