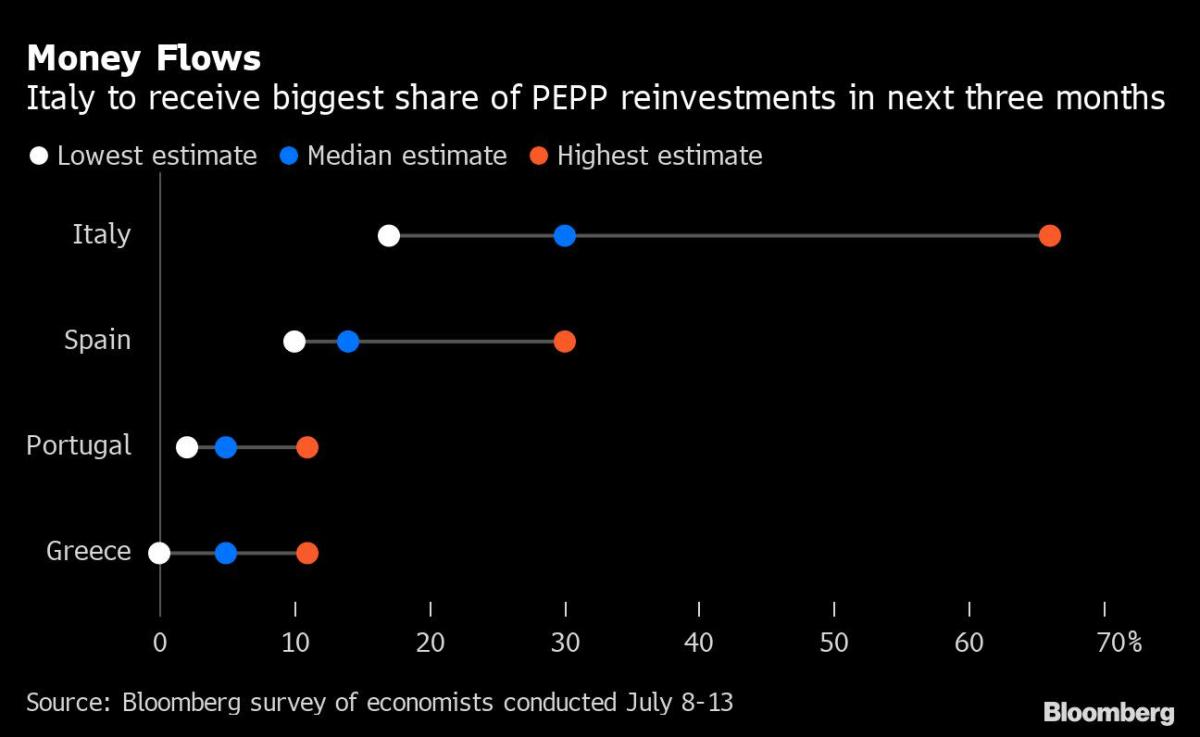 Almost 80% predict the instrument, known as the Transmission Protection Mechanism, will carry light conditions for governments it’s used to help. Nearly all expect the liquidity its purchases create to be reabsorbed in a process called sterilization.

As already-record inflation approaches double digits, economists see the ECB accelerating rate hikes following liftoff on July 21. But they still consider it behind the curve, with the Federal Reserve kicking off monetary tightening back in March and now weighing an historic 100 basis-point move this month.

The ECB conceded action was necessary after long arguing inflation is temporary. But as bond yields in the euro zone’s more-indebted members jumped at the prospect of the first rate hikes since 2011, officials decided they needed an instrument to run in parallel so monetary policy is effective.

“The design of the new tool will leave maximum discretion to the Governing Council,” said Kristian Toedtmann, an economist at Dekabank. “By being deliberately vague, central bankers hope that on the one hand the sheer existence of such a tool will be enough to avoid turmoil in financial markets, and on the other hand purchases of government bonds aren’t frequent enough to substantiate allegations of monetary financing.”

All the ECB’s previous asset-purchase programs triggered lawsuits in Germany, Europe’s largest economy, where beliefs in monetary orthodoxy run deep. Bundesbank President Joachim Nagel has said the latest measure should only be used in “exceptional circumstances and under narrowly defined conditions.”

Some of his colleagues hope the flexible reinvestment of maturing debt from the ECB’s pandemic portfolio will keep yields contained, and that net buying may not be needed if the new instrument is big enough.

Nearly two-thirds of economists surveyed predict the ECB will eventually have to use the instrument. Almost 90% expect it to be unlimited in size, and one in five can envisage the region’s central banks actively selling bonds they hold in their portfolios now to prevent fresh purchases from fueling inflation.

Economists see the deposit rate, currently at -0.5%, rising by a quarter-point this month and by twice that amount in September, followed by smaller steps at each subsequent meeting until March. It’s expected to peak at 1.25%.

“A 25-basis-point increase in July is almost certainly a done deal — the ECB has clearly telegraphed this.”

“I still expect a heated debate next week on whether or not 50 basis points could also be possible,” said Carsten Brzeski, global head of macro at ING. “I don’t exclude that option.”

ECB officials say decisions will be data-dependent. Since their June meeting, inflation has overshot again, while the euro has dropped to parity with the dollar for the first time in two decades.

A weaker currency risks further fueling price pressures just as the economy slows and uncertainty over energy supplies from Russia rises. The war in Ukraine is still considered the biggest risk to the outlook.

Economists TD Securities led by James Rossiter say the focus will remain on bringing down inflation, no matter what.

“The ECB will need to set expectations that they’re likely to still hike rates even if the euro area enters a recession in the second half,” they said, as inflation will be “keeping pressure up on the ECB through the autumn.”

Another $1.1BN In Arms Ukraine: “We Will Not Be Deterred,” White House Says