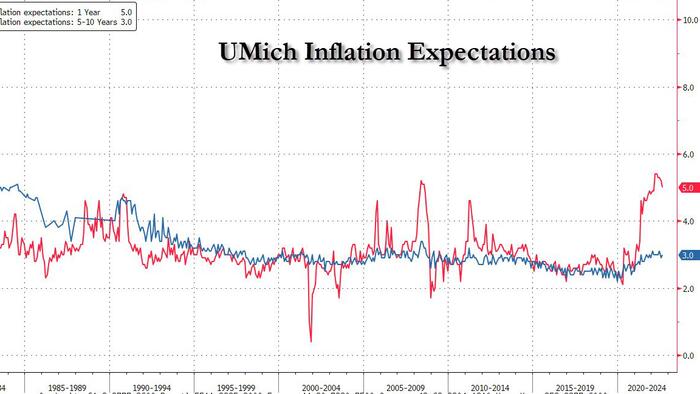 Contrary to expectations, it was actually Republican and Independent sentiment that improved in July, while Democrat sentiment tumbled to a fresh two-year low.

While optimism may have improved, buying conditions did not and as the chart below shows, buying conditions for most major purchases – house, car, large durables – remain mired at or near all time lows as inflation continues to crippled consumers’ shopping mood:

Below are some of the key comments from the report: as noted above, they underscore the schism between growing optimism about the future and deteriorating current conditions:

But while the headline UMich numbers were decidedly mixed, what may spook markets is that unlike the recent record collapse in inflation expectations documented by the NY Fed Consumer Survey earlier this week…

As a reminder, it was the 3%+ print (subsequently revised well lower) two months ago that prompted Powell to hike by a higher than expected 75bps in June. Which is why today’s 5-10Y inflation forecast was closely watched and hints at a continuation of tightening by the Fed.

As Bloomberg notes, “this is not a report that will comfort the Fed, and while it won’t swing the balance of risk for September to 75 bps, it does suggest that declaring victory over inflation is decidedly premature.”